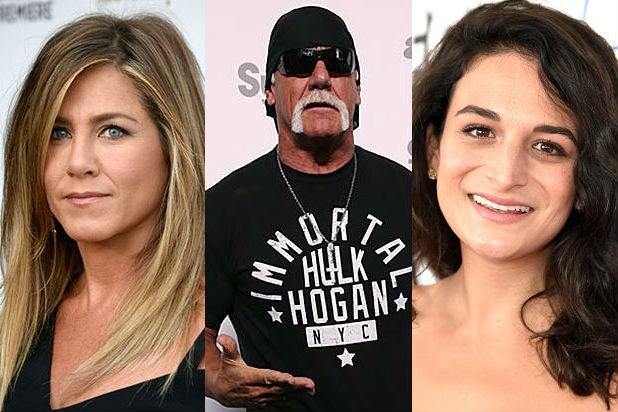 The Sundance Institute unveiled its competitive slates for the 2017 Sundance Film Festival, a diverse collection of features and documentaries packed with movie stars, litigious pro wrestlers and some promising newcomers.

The U.S. Dramatic Competition has some familiar faces, like Jennifer Aniston dialing back from her modern rom-com niche and stepping into “The Yellow Birds,” about a young soldier in the Gulf War grappling with tragedy. She costars with Han Solo himself, Alden Ehrenreich, and Jack Huston.

Making her directorial debut is Marti Noxon, a longtime TV vet who was a prominent writer on “Buffy the Vampire Slayer” and eventual creator of Lifetime’s “UnREAL.” She’ll hit the slopes with the anorexia drama “To the Bone” starring Lily Collins.

On the documentary side, the Hulk Hogan-Gawker saga is front and center with “Nobody Speak: Hulk Hogan, Gawker and Trials of a Free Press.” The Brian Knappenberger film examines the media circus that pit privacy rights against freedom of the press.

Pete Nicks also turns his lens on “The Force,” specifically the Oakland Police Department as it contends with community uprisings in the months following the unrest in Ferguson, Missouri.

In addition to the Dramatic and Documentary competition, Sundance also released a slate from its Next program. Read the full list of competition titles:

“I Don’t Feel at Home in This World Anymore”
Director and screenwriter: Macon Blair
When a depressed woman is burglarized, she finds a new sense of purpose by tracking down the thieves, alongside her obnoxious neighbor. But they soon find themselves dangerously out of their depth against a pack of degenerate criminals.
Cast: Melanie Lynskey, Elijah Wood, David Yow, Jane Levy, Devon Graye. World Premiere. DAY ONE

“Landline”
Director: Gillian Robespierre, Screenwriters: Elisabeth Holm, Gillian Robespierre
Two sisters come of age in ’90s New York when they discover their dad’s affair–and it turns out he’s not the only cheater in the family. Everyone still smokes inside, no one has a cell phone and the Jacobs finally connect through lying, cheating and hibachi.
Cast: Jenny Slate, John Turturro, Edie Falco, Abby Quinn, Jay Duplass, Finn Wittrock. World Premiere

“Roxanne Roxanne”
Director and screenwriter: Michael Larnell
The most feared battle emcee in early-’80s NYC was a fierce teenager from the Queensbridge projects with the weight of the world on her shoulders. At age 14, hustling the streets to provide for her family, Roxanne Shanté was well on her way to becoming a hip-hop legend.
Cast: Chanté Adams, Mahershala Ali, Nia Long, Elvis Nolasco, Kevin Phillips, Shenell Edmonds. World Premiere

“To the Bone”
Director and screenwriter: Marti Noxon
In a last-ditch effort to battle her severe anorexia, 20-year-old Ellen enters a group recovery home. With the help of an unconventional doctor, Ellen and the other residents go on a sometimes-funny, sometimes-harrowing journey that leads to the ultimate question– is life worth living?
Cast: Lily Collins, Keanu Reeves, Carrie Preston, Lili Taylor, Alex Sharp, Liana Liberato. World Premiere

“Walking Out”
Directors and screenwriters: Alex Smith, Andrew Smith
A father and son struggle to connect on any level until a brutal encounter with a predator in the heart of the wilderness leaves them both seriously injured. If they are to survive, the boy must carry his father to safety.
Cast: Matt Bomer, Josh Wiggins, Bill Pullman, Alex Neustaedter, Lily Gladstone. World Premiere

“Chasing Coral”
Director: Jeff Orlowski
Coral reefs around the world are vanishing at an unprecedented rate. A team of divers, photographers and scientists set out on a thrilling ocean adventure to discover why and to reveal the underwater mystery to the world. World Premiere.

“City of Ghosts”
Director: Matthew Heineman
With unprecedented access, this documentary follows the extraordinary journey of “Raqqa is Being Slaughtered Silently”–a group of anonymous citizen journalists who banded together after their homeland was overtaken by ISIS–as they risk their lives to stand up against one of the greatest evils in the world today. World Premiere

“The Force”
Director: Pete Nicks
This cinema verité look at the long-troubled Oakland Police Department goes deep inside their struggles to confront federal demands for reform, a popular uprising following events in Ferguson and an explosive scandal. World Premiere

“ICARUS”
Director: Bryan Fogel
When Bryan Fogel sets out to uncover the truth about doping in sports, a chance meeting with a Russian scientist transforms his story from a personal experiment into a geopolitical thriller involving dirty urine, unexplained death and Olympic Gold–exposing the biggest scandal in sports history. World Premiere

“The New Radical”
Director: Adam Bhala Lough
Uncompromising millennial radicals from the United States and the United Kingdom attack the system through dangerous technological means, which evolves into a high-stakes game with world authorities in the midst of a dramatically changing political landscape. World Premiere

“NOBODY SPEAK: Hulk Hogan, Gawker and Trials of a Free Press”
Director: Brian Knappenberger
The trial between Hulk Hogan and Gawker Media pitted privacy rights against freedom of the press, and raised important questions about how big money can silence media. This film is an examination of the perils and duties of the free press in an age of inequality. World Premiere

“Quest”
Director: Jonathan Olshefski
For over a decade, this portrait of a North Philadelphia family and the creative sanctuary offered by their home music studio was filmed with vérité intimacy. The family’s 10- year journey is an illumination of race and class in America, and it’s a testament to love, healing and hope. World Premiere

“STEP”
Director: Amanda Lipitz
The senior year of a girls’ high school step team in inner-city Baltimore is documented, as they try to become the first in their families to attend college. The girls strive to make their dancing a success against the backdrop of social unrest in their troubled city. World Premiere

“Strong Island”
Director: Yance Ford
Examining the violent death of the filmmaker’s brother and the judicial system that allowed his killer to go free, this documentary interrogates murderous fear and racialized perception, and re-imagines the wreckage in catastrophe’s wake, challenging us to change. World Premiere

“Unrest”
Director: Jennifer Brea
When Harvard PhD student Jennifer Brea is struck down at 28 by a fever that leaves her bedridden, doctors tell her it’s “all in her head.” Determined to live, she sets out on a virtual journey to document her story–and four other families’ stories–fighting a disease medicine forgot. World Premiere

“Water & Power: A California Heist”
Director: Marina Zenovich
In California’s convoluted water system, notorious water barons find ways to structure a state-engineered system to their own advantage. This examination into their centers of power shows small farmers and everyday citizens facing drought and a new, debilitating groundwater crisis. World Premiere.
Whose Streets? / U.S.A. (Director: Sabaah Folayan, Co-Director: Damon Davis) — A nonfiction account of the Ferguson uprising told by the people who lived it, this is an unflinching look at how the killing of 18-year-old Michael Brown inspired a community to fight back–and sparked a global movement. World Premiere.

“Don’t Swallow My Heart, Alligator Girl!” Brazil, Netherlands, France, Paraguay
Director and screenwriter: Felipe Bragança
In this fable about love and memories, Joca is a 13-year-old Brazilian boy in love with an indigenous Paraguayan girl. To conquer her love, he must face the violent region’s war-torn past and the secrets of his elder brother, Fernando, a motorcycle cowboy.
Cast: Cauã Reymond, Eduardo Macedo, Adeli Gonzales, Zahy Guajajara, Claudia Assunção, Ney Matogrosso. World Premiere

“My Happy Family,” Georgia
Directors: Nana & Simon, Screenwriter: Nana Ekvtimishvili
Tbilisi, Georgia, 2016: In a patriarchal society, an ordinary Georgian family lives with three generations under one roof. All are shocked when 52-year-old Manana decides to move out from her parents’ home and live alone. Without her family and her husband, a journey into the unknown begins.
Cast: Ia Shugliashvili, Merab Ninidze, Berta Khapava, Tsisia Qumsishvili, Giorgi Tabidze, Dimitri Oragvelidze. World Premiere

“Pop Aye,” Singapore, Thailand
Director and screenwriter: Kirsten Tan
On a chance encounter, a disenchanted architect bumps into his long-lost elephant on the streets of Bangkok. Excited, he takes his elephant on a journey across Thailand in search of the farm where they grew up together. Cast: Thaneth Warakulnukroh, Penpak Sirikul, Bong. World Premiere. DAY ONE

“Sueño en otro idioma (I Dream in Another Language),” Mexico
Director: Ernesto Contreras, Screenwriter: Carlos Contreras) — The last two speakers of a millennia-old language haven’t spoken in 50 years, when a young linguist tries to bring them together. Yet hidden in the past, in the heart of the jungle, lies a secret concerning the fate of the Zikril language.
Cast: Fernando Álvarez Rebeil, Eligio Meléndez, Manuel Poncelis, Fátima Molina, Juan Pablo de Santiago, Hoze Meléndez. World Premiere