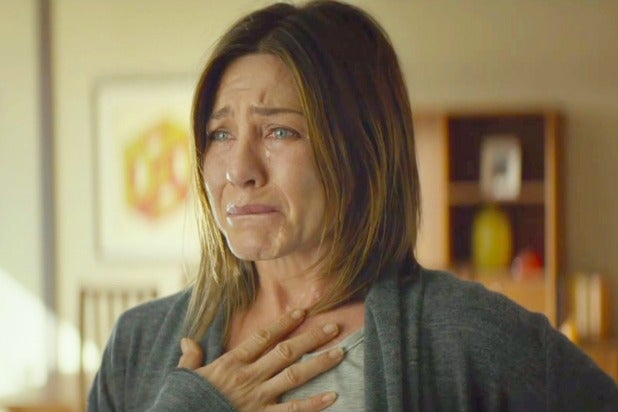 Jennifer Aniston isn’t pregnant — but she did give birth to a full-bore tirade on Tuesday.

In a lengthy screed published on Huffington Post, the former “Friends”-ter tore into the tabloids and, in particular, reports that she’s with child.

“For the record, I am not pregnant. What I am is fed up,” the 47-year-old actress wrote. “I’m fed up with the sport-like scrutiny and body shaming that occurs daily under the guise of ‘journalism,’ the ‘First Amendment’ and ‘celebrity news.'”

The actress went on to claim that she and her husband, Justin Theroux, are “harassed by dozens of aggressive photographers staked outside our home who will go to shocking lengths to obtain any kind of photo, even if it means endangering us or the unlucky pedestrians who happen to be nearby.”

Aniston went on to lament that the obsessive focus on the fictional bun in her oven is drawing attention away from more pressing issues.

“In this last boring news cycle about my personal life, there have been mass shootings, wildfires, major decisions by the Supreme Court, an upcoming election, and any number of more newsworthy issues that ‘journalists’ could dedicate their resources towards,” Aniston hissed.

The “Office Space” star also contended that, while she may one day become a mother, she doesn’t need an offspring to make herself feel whole as a human being.

She also threw shade at the body-shaming that comes with tabloid culture.

“I’m not in pursuit of motherhood because I feel incomplete in some way, as our celebrity news culture would lead us all to believe. I resent being made to feel ‘less than’ because my body is changing and/or I had a burger for lunch and was photographed from a weird angle and therefore deemed one of two things: ‘pregnant’ or ‘fat,'” the actress wrote.

Admitting that she’s not likely to change the tabloids’ approach to coverage, Aniston instead suggested that the public turn its back on tabloid coverage.

“What can change is our awareness and reaction to the toxic messages buried within these seemingly harmless stories served up as truth and shaping our ideas of who we are,” Aniston wrote. “We get to decide how much we buy into what’s being served up, and maybe some day the tabloids will be forced to see the world through a different, more humanized lens because consumers have just stopped buying the bulls–t.”