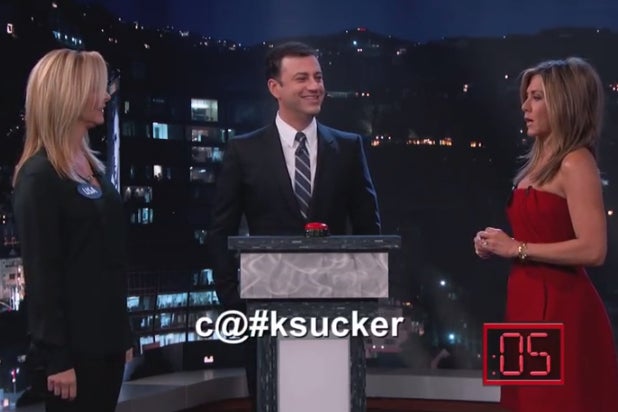 Who knew Jennifer Aniston memorized so many filthy words?

The star of “Horrible Bosses 2” took on her former “Friends” co-star Lisa Kudrow in a highly spirited — and dirty — game of Jimmy Kimmel’s “Celebrity Curse-Off” on Monday.

The competition started strong with coin-toss winner Aniston opening with “dick licker,” which was countered by the different-enough “cock sucker” out of Kudrow. Naturally, the phrases were bleeped and words censored on screen.

At one point, Kudrow and Aniston reminisced about how often the HBO “Comeback” star used to scream “fucking shit” on the “Friends” set. Apparently, it was quite a lot.

And when Kudrow drops “chode,” she explains: “I have a teenage son.” That seemed to satisfy everyone.

Later, Aniston gets away with one as she kinda-sorta repeats “cock face.” When it is accepted, Kudrow panics and drops the definitively not-a-curse “snap pants,” along with the R-rated game.