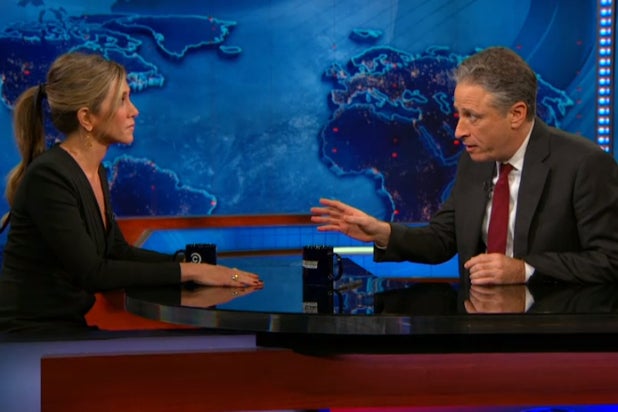 Jon Stewart welcomed actress Jennifer Aniston to “The Daily Show” on Thursday, where the “Cake” star plugged her new film and dropped an F-bomb here and there.

The two also discussed the crazy number of awards shows put on by Hollywood — it’s perhaps a baker’s dozen too many at this point. (Our words, not their.)

First topic, the new film, for which Aniston earned a Screen Actor’s Guild Awards nomination, but missed an Oscar finalist nod. When asked about her mindset in making such a risky movie, Aniston qualified it as “Screw it.” When Stewart rose her a “Fuck it” she matched the swearing sentiment, twice.

“It was tricky,” Aniston added, more sincerely. “It was a lot of layers.”

Cue an all-out race to hit the “Cake” pun first. They tied, by our watch.

The two then moved over to the ridiculous lack of a dearth of dinners and ceremonies during awards season.

“It’s never been my motivation … having a trophy,” Aniston said. “But it is sure nice when they call you really early and they say that happened. I just never experienced it before.”

Also Read: 15 of Jennifer Aniston’s Winners and Losers at the Box Office (Photos)

The former “Friends” star then took a few moments to compliment Stewart on his level of attraction, something the insecure Comedy Central host could sure use. Oh, and then they started throwing a bunch of pens around to prove how old he is. It’ll all make sense in the snippet below.