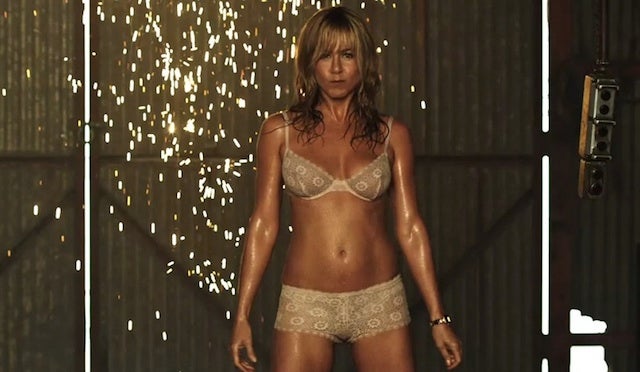 Jennifer Aniston's "We're the Millers" got off to a strong start at the box office on Wednesday, with the R-rated comedy racking up $6.7 million in its first day of release.

The foul-mouthed film is on track to rack up more than $30 million in its first five days in theaters — a particularly good showing given that the New Line film cost less than $40 million to produce.

"We're the Millers" squared off against "Percy Jackson: Sea of Monsters," the $90 million follow-up to 2010's "Percy Jackson & The Olympians: The Lightning Thief." The gods and mythical beasts mash-up earned $5.4 million.

"We're the Millers" opened in 3,260 locations to a critical cold-shoulder from most reviewers, eking out a doleful 34 percent "rotten" rating on Rotten Tomatoes. Audiences seem to like the movie, however, giving it an A- Cinemascore rating.

The film stars SNL" alum Jason Sudeikis as a pot dealer who must enlist a stripper played by Aniston, a homeless girl played by Emma Roberts and his nerdy neighbor played by Will Poulter to pose as his family while he tries to smuggle drugs across the Mexican border.

"Percy Jackson" debuted on 2,907 screens and will expand to over 3,000 by Friday.  It is on track to earn roughly $25 million over its first five days in theaters.

See photos: 15 of Jennifer Aniston's Winners and Losers at the Box Office

It's shaping up to be a packed weekend at the box office, with Matt Damon's heavily anticipated sci-fi film "Elysium" and Disney's "Planes" both hitting theaters on Friday.