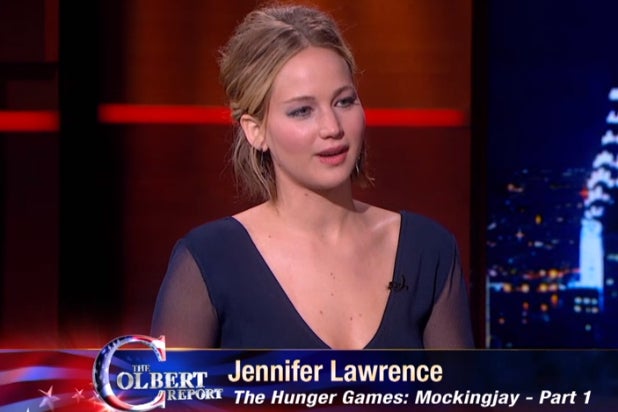 Stephen Colbert opened his New York Comedy Central studio for the “it” girl of the A-list Hollywood community, Jennifer Lawrence, who popped in Thursday to promote her new movie and plan her presumptive future downward spiral.

How famous and successful is the 24-year-old star of the “Hunger Games” franchise?

“You’re in the ‘In Memoriam’ reel already at this point,” Colbert assured her, before getting into the particulars of the upcoming “Mockingjay – Part 1” installment.

“Katniss Everdeen — aren’t you kind of like her a little bit?” Colbert asked. “Because you’re from Kentucky, isn’t that a little District 12-y in places?”

“There is coal mining,” Lawrence cooly responded, before dropping a solid joke: “But I’ve never volunteered for anything in my life.”

“I grew up in Kentucky, not, you know, skinning squirrels,” the actress continued. “Actually I have skinned a squirrel before so … I can’t even say that.”

Lawrence called out her own lie, copping to having even eaten squirrel chili.

Later, the duo planned out her impending meltdown with Colbert suggesting that it should involve crystal meth and car-jacking.

While she’s down with the idea, Lawrence doesn’t dig the drug: “Bad for the skin,” she told him.