Moviegoers this weekend will pay a tribute north of $125 million to Jennifer Lawrence‘s Katniss Everdeen and “The Hunger Games: Mockingjay – Part 2,” the final entry in Lionsgate’s blockbuster young adult franchise that debuts Friday.

That will be more than enough to knock James Bond thriller “Spectre” from the top spot and outstrip the weekend’s other two wide openers, analysts say. The R-rated Seth Rogen-Evan Goldberg holiday comedy “The Night Before” from Sony Pictures is projected to land at around $15 million, and “Secret in Their Eyes,” an ensemble thriller starring Julia Roberts, Chiwetel Ejiofor and Nicole Kidman from STX Entertainment, is looking at around $8 million.

Starting with “the Hunger Games” in 2012 and continuing with 2013’s “Catching Fire” and last year’s “Mockingjay – Part 1,” the series has grossed more than $2.3 billion. It’s been particularly lucrative since the combined budget for the four films is under $460 million — moderate for an epic franchise — and the groundbreaking digitally-driven marketing campaigns have been noted for cost-effectiveness.

When “Harry Potter and the Deathly Hallows Part 2” closed out that franchise in 2010 it enjoyed a huge boost over its most immediate predecessor, but that won’t happen with “Mockingjay – Part 2.”

“That extended trailer we called ‘Part 1’ means we’re not going to see a jump like the last ‘Harry Potter’ did,” said Jeff Bock, senior media analyst at Exhibitor Relations Company. “This one will be more like the ‘Twilight’ finale.”

Also Read: Why 2015 Box Office Record May Come Down to 'Star Wars: The Force Awakens'

Lionsgate split the last of Collins three novels into two films, and last year the first “Mockingjay” opened to nearly $122 million and was the lowest-grossing of the trio domestically at $336 million, but the second-highest globally at $755 million. “Twilight: Breaking Dawn – Part 2,” like “The Hunger Games” a teen girl-powered blockbuster franchise for Lionsgate, followed a similar domestic-down, foreign-up pattern in 2011.

“The Hunger Games” franchise currently ranks No. 20 on the all-time global grosses list with $2.3 billion. If this one can make its way to $1 billion worldwide it would finish at No. 3, essentially tied with the “Twilight” franchise, which included four movies.

Co-stars Josh Hutcherson and Liam Hemsworth return as do Woody Harrelson, Elizabeth Banks, Donald Sutherland and Stanley Tucci for director Francis Lawrence. The “Hunger Games” movies have been well-reviewed and the finale is no exception at 74 percent positive on Rotten Tomatoes. Social media is typically very strong and the movie’s dominating advance ticket sales.

Lionsgate has the PG-13-rated “Mockingjay – Part 2” in a saturation-level 4,000-plus theaters. 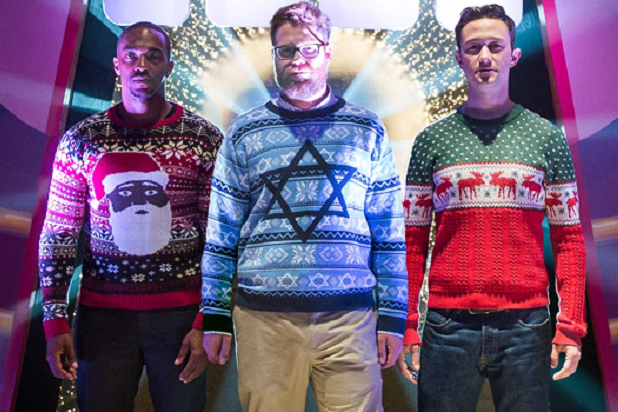 “The Night Before” is the first effort from Goldberg and Rogen since “The Interview,” their assassination comedy that set off the Sony hacking scandal and had North Korea ready to go to war with the U.S. This rollout should go more smoothly.

“You have to like the way Sony stuck with these guys and even got a little mileage out of ‘The Interview’ with the marketing ,” said Bock. “It’s smart because a raunchy comedy can do well around the holidays.”

The movie co-stars Joseph Gordon-Levitt and Anthony Mackie and has good reviews (74 percent positive on Rotten Tomatoes). It will screen in around 2,700 theaters. 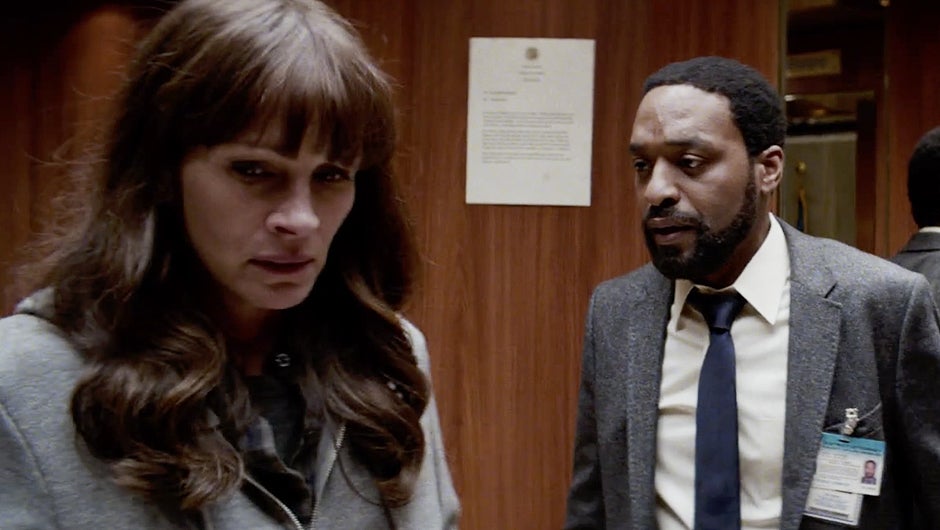 “Secret in Their Eyes” is the first thriller for Roberts since “Sleeping With the Enemy.” Originally set for a late-October release, the studio pushed it because it saw a chance to connect with an older date-night crowd over the Thanksgiving holiday.

“They marketed ‘The Gift’ (STX’s last release) very well to this same crowd and I have to think this one will do even better,” said Bock. “The Gift,” with a $5 million budget, debuted to roughly $12 million and has gone on to nearly $60 million domestically.

“Secret in Their Eyes” cost more at $19 million, but the well-known cast gives it a higher ceiling than “The Gift.” STX will have the movie in roughly 2,400 theaters.