Jennifer Lopez was celebrated for her work in advancing the progress of lesbian, gay, bisexual and transgender rights by the Human Rights Campaign at its 17th Annual HRC National Dinner on Saturday.

The singer, actress, “American Idol” judge and producer was honored with the 2013 Ally for Equality Award at the Washington D.C. event for her support of marriage equality, HIV/AIDS research, anti-bullying and youth anti-violence causes, and her work as the executive producer of ABC Family’s “The Fosters.”

The one-hour drama follows a multi-ethnic family mix of foster and biological kids being raised by a lesbian couple played by Teri Polo and Sherri Saum.

Iconic activist Gloria Steinem presented Lopez with the award, which recognizes the “outstanding efforts of those who dedicate time, energy, spirit and whole-hearted commitment to better the lives of LGBT people,” according to HRC.

HRC also presented the National Equality Award to the plaintiffs and attorneys from the Proposition 8 and Defense of Marriage Act (DOMA) cases. 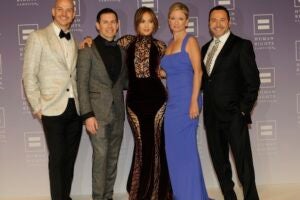 Singer/songwriter Sara Bareilles performed her empowerment anthem, “Brave,” in front of the event’s more than 3400 guests at the Washington DC Convention center.

When the HRC’s choice of Lopez for the Ally award was announced in September, there was some controversy over the choice in light of Lopez’s performance for the president of Turkmenistan at a concert in July in that country, which has been ranked as one of the worst offenders in the world for human rights abuses.

Lopez later apologized for the performance, claiming she and her representatives had no knowledge of human rights abuses in the country.