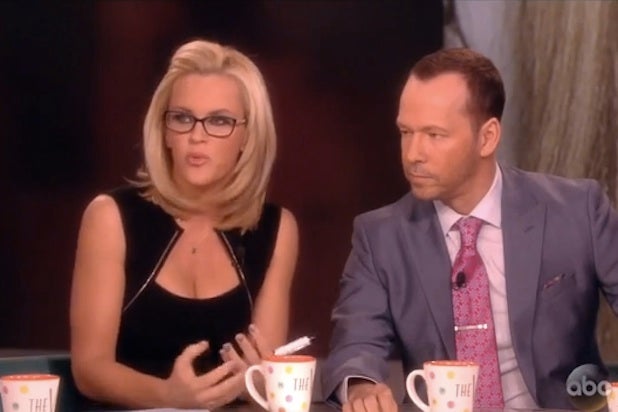 On Tuesday’s “The View,” Jenny McCarthy was skeptical about Chelsea Clinton’s recent comments saying she didn’t care about money. The former first kid told Fast Company (later republished in the Telegraph) had said, “I was curious if I could care about (money) on some fundamental level, and I couldn’t.”

“All I know is when I look at that example, you know, she lives in a $10 million dollar apartment, she was born with a silver spoon in her mouth,” McCarthy said.

“By the time she was born she was more well off than most Americans; her concept of money is much different,” McCarthy said. “And when I look at that, I look at my son Evan, so I want to make sure he starts working at a very young age.”

Guest host Rick Fox wondered if the Clintons were trying to relate more to the lower and middle classes, in contrast with Mitt Romney.

“It feels insincere to me,” guest host Donnie Wahlberg said. “What’s going on with the Democrats?”

“I think when they hear it, people say, ‘Wait a minute — you haven’t gone through anything to say you don’t care about money,'” Shepherd pointed out. “It would be interesting to see if you had to live in a two-bedroom apartment and your pink slip came for the rent, and then the pink slip came for the cable, which one would you pay first. I think if they knew you went through that journey, they might be able to get what she said about money,”

“In fairness to her, what she was saying was she wants to give her time to charity,” Wahlberg said. “She works for the Clinton Foundation. But my biggest thing, everybody suddenly being broke. Career politicians trying to relate to the common folks, claiming they’re broke. It’s not fair to people who ain’t got no money and can’t pay their rent.”