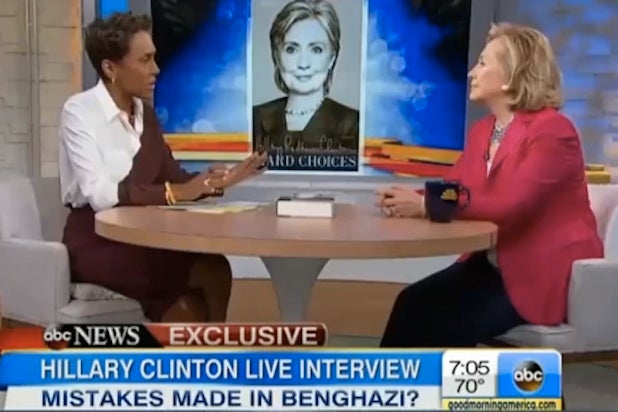 “GMA” anchor Robin Roberts held former secretary of state Hillary Clinton’s feet to the fire over comments she made to Diane Sawyer that she and her husband were “dead broke” after leaving the White House in 2001. Her remarks have been called the “first gaffe of 2016” in multiple news reports.

“…The reaction has been very strong about what you said to Diane about you and your husband leaving the White House as you said, ‘dead broke,’ using the words ‘struggling’ and that it wasn’t easy when many Americans are in the same situation,” Roberts said. “But they know they don’t have a book and the opportunities that you have. Any regrets in how you phrased that?”

Also read: Hillary Clinton Reveals She and Bill Were ‘Dead Broke, In Debt’ After Leaving the White House (Video)

Clinton defended her comments by saying “it was just a reality” that she and President Clinton faced financial difficulty and that they had to continue “working really hard.”

“Let me just clarify that I fully appreciate how hard life is for so many Americans today,” Clinton said. “It’s an issue that I have worked on and cared on my entire adult life. Bill and I were obviously blessed. We worked hard for everything we got in our lives and we have continued to work hard. And we’ve been blessed in the last 14 years. But I want to use the talents and resources I have to make sure other people get the same chances. So, for me, it’s just a reality what we faced when he got out of the White House, meant we had to keep working really hard. We always have, that’s who we are. We’re grateful that we can do that, but I worry a lot about people that I know personally and people in our country that don’t have the same opportunities that we’ve been given.”

“Can you understand the reaction though when you say struggling?” Roberts pressed.

“Well, yes I can,” Clinton said. “But I think, you know, everything in life has to be put into context and as I recall, we were something like $12 million in debt. And, you know, that was something that we really had to work hard. And I was in the Senate, and could not do anything to help us meet those obligations. And I’m very grateful that my husband who’s always been a hard worker since he was born, poor, and given opportunities with a good education and strong values to work hard and take responsibility, he did that.  So, you know, we understand what that struggle is because we had student debts, both of us, we had to pay off. We’ve had to work. I had a couple of jobs in law school; he had a lot of jobs. So, we have a life experience that is clearly different in very dramatic ways from many Americans, but also we have gone through some of the same challenges as many people have.”