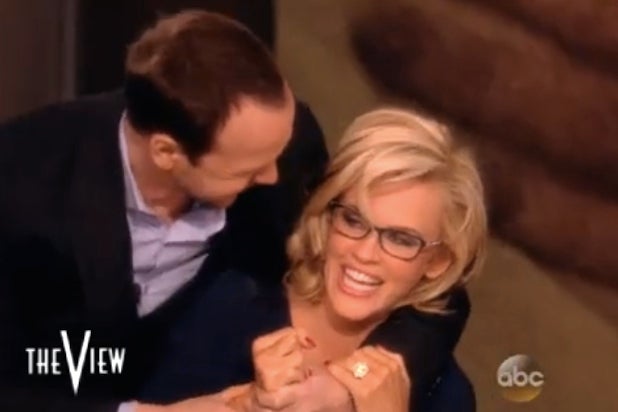 Yo Barbara Walters, I’m really happy for you and I’m gonna let you finish, but Jenny McCarthy is getting engaged!

“The View” doyenne’s announcement that all 11 current and former co-hosts would reunite for her farewell show was usurped by McCarthy’s sudden interjection that she was getting engaged to “Blue Bloods” star and NKOTB singer Donnie Wahlberg.

Also read: Megyn Kelly Rips Jenny McCarthy on Vaccine Flip-Flop: ‘She Raised a Lot of People’s Fears About This!’ (Video)

“You guys remember I did ‘Date My Dad’ a few months ago. and I wanted to give a little bit of an update,” McCarthy teased. “He — you know, I set him up with someone, and I’m happy to say he found love. He’s very happy, with one of the women.”

Also read: ‘The View’ to Reunite All 11 Co-Hosts for Barbara Walters Farewell

“Are you going to tell us who?” Walters interrupted.

“He’s very happy, because he’s happy for me, because I just got engaged!” McCarthy exclaimed, jumping up and down for joy.