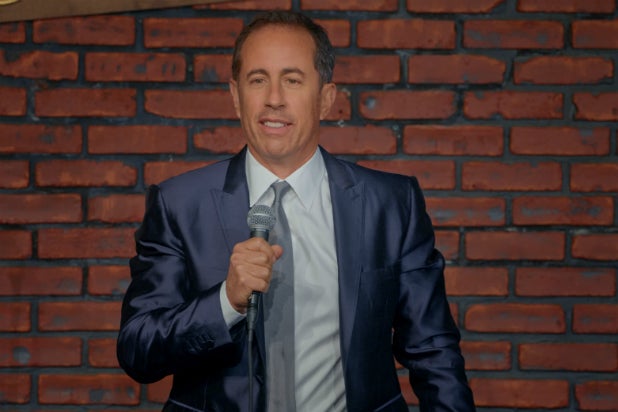 Jerry Seinfeld is in a safe space — too safe critics complain.

“Jerry Before Seinfeld” hit the Netflix stage on Tuesday, and the reviews are mixed.

Seinfeld already gave audiences an intimate portrait of his life in the 2002 documentary “Comedian,” which followed him getting back into stand-up following the conclusion of his sitcom. So people who were hoping for something more personal and telling from “Jerry Before Seinfeld” may be disappointed.

The special is a look back on his life told through old family photographs and videos, but it’s mostly him going through his greatest hits and paying tribute to Johnny Carson. There’s not much new here, critics are saying.

Ultimately, your enjoyment of the Netflix special likely comes down to how you feel about the comedian and his traditional form of stand-up and observational humor. Of course, Newsday — the newspaper of note on Long Island — loved it.

Check out more of the reviews below.

All these years later, and all that money richer, Seinfeld is still doing comedy about nothing. The question is whether that still works today when everything, even Jerry Seinfeld jokes, is mandated to stand for something. (A closing bit about how we shouldn’t be surprised that a president might be crazy because anyone who has the notion that they could be qualified to lead the free world is insane is the closest he gets, and you’d be hard-pressed to consider that the fodder of thinkpieces.)

But again, that’s the exasperating thing about “Jerry Before Seinfeld.” The retro humor works, until it doesn’t.

Interspersed with anecdotes about his early days in stand-up, clips of the comic surrounded by his old comedy albums, issues of Mad magazine, and–in one contrived but still-striking image–a New York street paved with purported pages from his actual accordion file of jokes, “Jerry Before Seinfeld” forms an unsatisfying portrait of the artist as a young comic… Seeing the fresh-faced Seinfeld waving goodbye after his first 1981 guest spot on Carson’s Tonight Show fade into that of the now sixtysomething Seinfeld doing the same to a packed club of adoring fans doesn’t evoke anything but the reflection that those same jokes still work after all these years.

“Jerry Before Seinfeld” is essentially Jerry-Before-Fame-and-Fortune, when he was a young adult from Massapequa pursuing a dream with an expanding file folder of jokes. The jokes are classics, reasonably timeless, and as long as there’s candy, sugar-based cereals, political mascots, notary publics, magicians, cotton balls, sports uniforms, old people and, of course, socks, these jokes will work.

Its packaging notwithstanding, “Jerry Before Seinfeld” doesn’t feel much different than any other Seinfeld concert or talk-show appearance, except for the old photos, Seinfeld family home movies, and archival footage of young Seinfeld doing stand-up… Those hoping for a thorough and surprising documentary about Seinfeld, or even a concert with a heavily confessional bent, will be disappointed. But of course, these same people would need to be unfamiliar with Seinfeld’s work to expect more than that.

Jerry Before Seinfeld shines whenever it lets the comic be a comic. A huge swathe of the material he performs on the Comic Strip Live stage is dated. Seinfeld makes this crystal clear to his audience whenever he explains a particular joke’s significance to his early career, or tries to provide some context for outdated references or notions. Fans of Seinfeld, the comedian who starred in it, and comedy in general will appreciate these nostalgic deep dives, and this may very well have been the film’s sole purpose.

31 Worst Sitcoms of All Time: From 'Mama's Family' to 'Coupling' (Photos)

Hey, not everything can be “Seinfeld”

A good sitcom can make viewers forget their troubles for 22 minutes. Warning: The following list does not name any of those kinds of shows.

TheWrap dumpster-dives deep to find for you these, the 31 worst sitcoms of all time. Happy browsing!