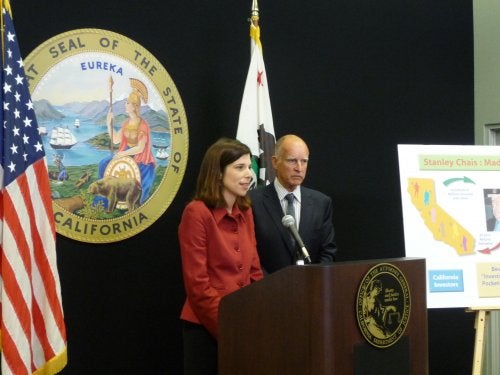 “Where do you want to hold the deposition,” one New York lawyer asked another in L.A. on Thursday. “Madison Square Garden or the Javits Center?”

The morning kicked off the first of many conferences and hearings between lawyers for disgraced investment broker Stanley Chais and a conga line of plaintiffs, including the California attorney general’s office.

The lawyer’s joke about the deposition venue referred as much to its marathon nature as it did to the intense interest Chais’ interrogation will generate within legal and financial circles.

At this stage the attorneys and Superior Court Judge Elizabeth White are merely talking about a future in which evidence will be traded under discovery rules and, ultimately, Chais, 83, will be deposed. The civil trial itself hovers on a distant horizon.

Chais has been identified in court papers as the Los Angeles “feeder” for the Moby Dick of Ponzi schemers, Bernard Madoff. It’s the curious nature of Chais’ bicoastal notoriety that some local media refer to him as a New York investor, while New York press accounts call him a Beverly Hills financier. In any event, Chais maintained homes in both locales and is currently bunkered down in his Fifth Avenue apartment in Manhattan.

Like Madoff on the East Coast, Chais was viewed in L.A. and Hollywood with awe as an investment shaman who earned clients 25 percent returns. It turned out, however, that he merely forwarded people’s money to Madoff’s wallet in New York. Last September Jerry Brown held a highly publicized news conference to announce a multi-count complaint against Chais and his Lambeth, Brighton and Popham companies.

“Basically,” Deputy Attorney General Alexandra Robert Gordon (pictured above with Brown) told KPCC FM’s Brian Watt at that time, “Lawyers and doctors and playwrights, people in writing groups, people at the Mulholland Tennis Club talked to each other about these terrific returns that they were getting from this seeming financial genius Mr. Chais. It was all very exclusive, it was all somewhat hush-hush. People were really lining up to invest with Mr. Chais.”

Today Gordon, who works out of the AG’s San Francisco office, struggled to make sure the state’s claims against Chais didn’t get lost in the shuffle of other plaintiffs, who today included Leghorn Investments and Bottlebrush Investments.

“We are the state of California,” she reminded Judge White.

Chais, said to be in ill health with a bone-marrow disorder, is battling a three-front war. Besides the Los Angeles action, in New York he faces a fraud complaint filed by the Securities Exchange Commission, and is a target of restitution actions by Irving Picard, the pitbull trustee representing Madoff’s victims.

Chais, whose Chais Family Foundation was a notable source of money to Jewish charities (distributing nearly $11 million in 2007, according to IRS tax returns), has already weathered a few lawsuits, including one by screenwriter Eric Roth (“The Curious Case of Benjamin Button,”“Forrest Gump”), which was settled in September under undisclosed terms.

The proceedings in the Stanley Mosk Courthouse promise to be long, complicated and perhaps a little confusing. Type in Chais’ name in a Nexis legal document search and a message appears on monitors asking, “Did you mean ‘CHAOS.’”

Chaos may well be an inevitable by-product of this case that will partly combine the state’s interests with that of individual plaintiffs. The AG’s complaint alleges that Chais made almost $270 million over the past decade and, among other things, seeks $25 million in penalties from the defendant. Jerry Brown and Alexandra Gordon seem determined to get as much of that as they can.

They are, after all, the state of California.