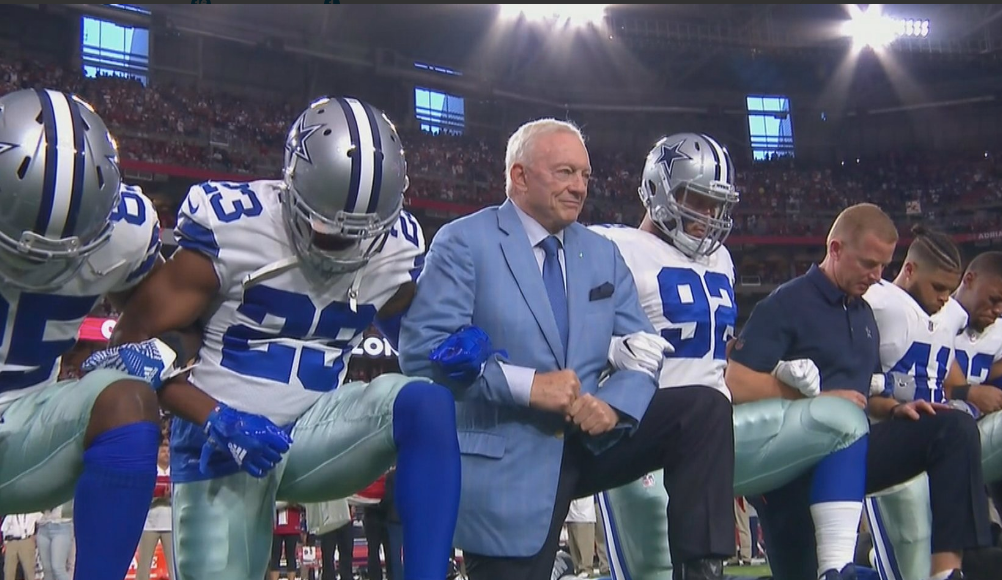 Dallas Cowboys owner Jerry Jones joined his team as they locked arms and took a knee ahead of the national anthem before Monday’s game against the Arizona Cardinals, capping a weekend when anthem protests took center stage with one of the more powerful gestures of Week 3 of the NFL season.

After President Trump called for NFL owners to fire players for not standing for the anthem during a rally in Alabama Friday — and doubled down on that position on Twitter over the weekend — several owners joined their teams on the sidelines during Sunday’s games to lock arms in a display of unity. The Arizona Cardinals did the same Monday night during ESPN’s airing of the game from Arizona.

Jones’ decision to kneel was most notable, however, as he has been an outspoken supporter of the president and previously said he did not support anthem protests. He apparently changed his tune Monday. Jones, Coach Jason Garrett and other Cowboys coaches and front office executives then locked arms while standing on the field as Jordin Sparks belted out the anthem.

Former San Francisco 49ers quarterback Colin Kaepernick began protesting the national anthem last year, first sitting and then taking a knee as a sign of his opposition to police brutality. Several other players on other teams followed suit, but after Trump’s comments — in which he referred to protesting NFL players as “SoBs” — significantly more decided to demonstrate this past weekend.

The Pittsburgh Steelers, Tennessee Titans and Seattle Seahawks decided to remain in their respective locker rooms during the anthem ceremony, while owners including Jacksonville’s Shahid Khan, Detroit’s Martha Ford and Washington’s Dan Snyder stood arm-in-arm with their players.