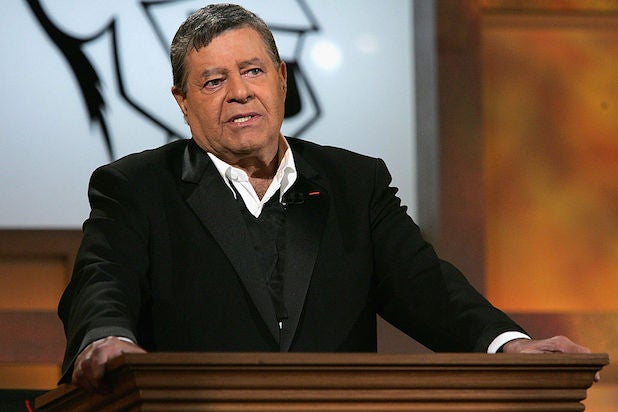 Love is pouring in from all walks of the entertainment industry for the legendary Jerry Lewis, who died Sunday.

Robert De Niro, who worked together on the 1983 dark comedy, Martin Scorsese-directed film “The King of Comedy,” said in a statement: “Jerry was a pioneer in comedy and film. He was a friend. I was fortunate to have seen him a few times over the past couple years. Even at 91, he didn’t miss a beat… Or a punchline. He’ll be missed.”

Scorsese was also moved by the comedian’s death. “Jerry Lewis was a master. He was a giant. He was an innovator. He was a great entertainer. He was a great artist. And he was a remarkable man,” the Oscar-winning director wrote in a statement. “I had the honor of working with him, and it was an experience I’ll always treasure. He was, truly, one of our greats.”

Here is a spattering of other famous names paying tribute to the one-of-a-kind Lewis:

How lucky are we to have ever had Jerry Lewis in the 1st place? We'll certainly never see his equal again. What a giant. RIP my friend.

That fool was no dummy. Jerry Lewis was an undeniable genius an unfathomable blessing, comedy's absolute! I am because he was! ;^D pic.twitter.com/3Zdq9xhXlE

It was incredible knowing & laughing with the Amazing Jerry Lewis! He'll keep'em laffin in the ever after!

Jerry Lewis was a genius comedian, actor, director, inventor, humanitarian and, as a Las Vegan, what I miss most..https://t.co/R0uLkPOwyU

So saddened to learn of the passing of Jerry Lewis, a true comic icon. In Boston 1947 I roared at his and Dean's first ever performance

To lose @IAmDickGregory & #JerryLewis days apart… My thoughts and prayers to your families, talent like yours can never be equalled! #RIP

I'm so heartbroken that Jerry Lewis passed away. His buddy films w/ Dean Martin are still some of my all-time favorites…

How you made us laugh!!! We will miss you Jerry Lewis! #RIP https://t.co/DP0BZSsGeN

Jerry Lewis loomed large in my family. Many movies with my mom & he made home movies with Janet and Tony. He made me and many laugh. #rip pic.twitter.com/4LbEbc9FCT

RIP jerry lewis… he was always so nice to me – the greatest of all time.

Sad to read about the passing of Jerry Lewis. We met when we both received honorary degrees from Emerson in '93; how he made me laugh! RIP. pic.twitter.com/fNKcEyXFXK

As a child I LIVED for his movies. NOBODY could match his on-screen hilarity! As an adult I learned he was just as funny backstage. #Genius pic.twitter.com/4YuuXpRT0p

One of the greatest of all time. A legend. A showman. A comedic icon. A movie star. An activist. A one of a kind. RIP #jerrylewis pic.twitter.com/h3ODZgZjAa

Also Read: The French Were Right About Jerry Lewis - He Was a Genius

It was one of the great experiences of my career he was tough but one of a kind #JerryLewis https://t.co/ohGUzlYPYB

As a kid, I'm pretty sure I was the biggest Jerry Lewis fan in the world. Truly. R.I.P. Jerry Lewis.

Jerry Lewis has passed on. I sincerely hope his afterlife is a warm, peaceful…

Dick Gregory and Jerry Lewis were two of the funniest, most legendary and prolific entertainers of our generation and I bow to their genius.

Thanks for all the laughs, Jerry. pic.twitter.com/RUiyf7xjOb

How did my life get good enough that Jerry Lewis would smile at me? And how sad to lose him. pic.twitter.com/taPhl1utzO

Condolences to the family of Jerry Lewis. The world is a lot less funnier today. ☹️

#RIPJerryLewis
Thank you for changing my life.
You were punk before there was punk. https://t.co/J3xfr1eeIX

The French were right about him all along. RIP Jerry Lewis pic.twitter.com/jNLRPQeS4G

We have lost a great comedian and even greater heart. Thank you for the laughs and the feels, Jerry Lewis. https://t.co/vdYCfd7atJ

My bad yall
The killer is still alive
Its Jerry Lewis, not Jerry Lee Lewis who passed away
Sorry bout that
Read the alert wrong

The King of Comedy Jerry Lewis was a tremendous talent and a good friend. Rest In Peace #jerrylewis. You'll be sorely missed ???? pic.twitter.com/KA0TWrvYir

Oh NOOOOO!!! Jerry Lewis just died! Another comic legend has left us. Martin&Lewis were the Beatles of comedy! Nobody was EVER bigger!

Jerry Lewis was a complicated man of astonishing talent.

If u are in comedy, you've been influenced by him, whether u know it or not. RIP https://t.co/VE5KZMETMU

Jerry Lewis thanks for years of laughter and raising money for your charity. Your comic brilliance continues to inspire me!

My deepest condolences and prayers to the entire Lewis family . The world lost a great man today. Jerry Lewis. pic.twitter.com/KBwgquLbKh

Raised $2.6 billion to fight muscular dystrophy and help those who suffer from it. Farewell, Mr. Lewis. pic.twitter.com/2qVcikrABv

Dick Gregory and Jerry Lewis were both great to me. It's a tough day. I will remember both tonight at my show tonight in Edinburgh.

"You might as well like yourself; just think about all the time you're gonna have to spend with you." — Jerry Lewis #RIP pic.twitter.com/R4UGIGSxBv