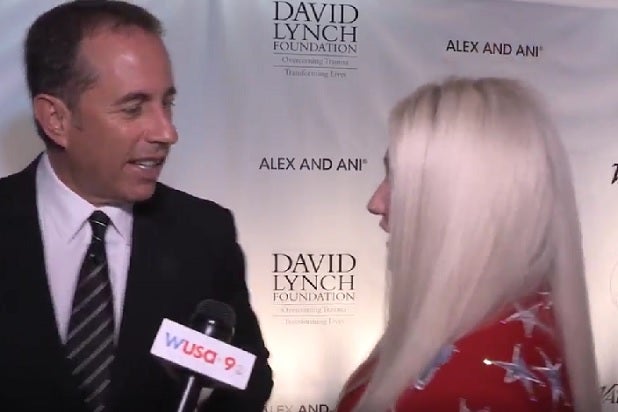 After their awkward run-in earlier this week, Jerry Seinfeld and Kesha hugged it out… in a manner of speaking.

Seinfeld found himself at the center of a viral moment earlier this week when video of him refusing to hug “Tik Tok” singer Kesha on the red carpet surface. The comedian told Extra on Thursday that, after the cringe-worthy encounter, the two had a chuckle about it.

“She was very nice about it, we laughed about it,” Seinfeld recalled.

Also Read: Jerry Seinfeld Practically Runs From Kesha as She Tries to Hug Him in Awkward Run-In (Video)

Even so, the former “Seinfeld” star defended his staunch refusal of Kesha’s embrace.

Calling Kesha’s mid-interview approach “a little off,” the comedian continued, “When you get to be my age and you’ve done a couple things, you have your own reality. In my reality… I don’t hug a total stranger. I have to meet someone, say hello. I gotta start somewhere… hug isn’t first moment of a human, two humans. I never did that.”

In the now-famous video, Seinfeld was in the middle of a red-carpet interview when Kesha approached him, saying, “I love you so much.”

“No, thanks,” Seinfeld replied.

“No, thanks,” the comedian again asserted.

“A little one,” Kesha asked once more.

“Yeah, no thanks,” Seinfeld once again insisted, this time putting up his hand and backing away to put some distance between himself and the insistent hug-seeker.

After the awkward exchange, Seinfeld told his interviewer, “I don’t know who that was,” before being told it was Kesha.

While Seinfeld acknowledged that he made nice with the singer after the initial uncomfortable encounter, he was adamant that their make-up sesh didn’t end with a hug.

“No!” the comedian told Extra.