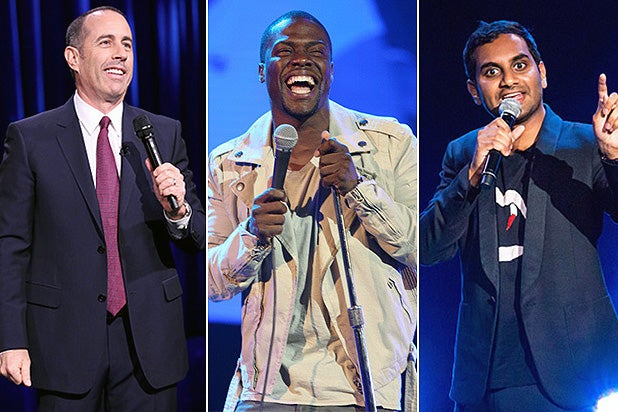 Nearly two decades after his sitcom went off the air, Jerry Seinfeld is still laughing all the way to the bank.

Seinfeld, who currently stars in the digital Crackle series “Comedians in Cars Getting Coffee,” tops Forbes’ list of Highest Paid Comedians, which was published Wednesday.

According to Forbes, Seinfeld hauled in $36 million from June 1, 2014 and June 1, 2015. It attributed the haul to “Seinfeld,” which Hulu purchased the rights to for $160 million, as well as his touring and “Coffee” revenue.

Coming in second place was Kevin Hart, who amassed $28.5 million in the same period. Chalk the huge payday up to his substantial draw for live shows and films such as “Think Like a Man Too” and “The Wedding Ringer.”

Funnyman Terry Fator came in third with $21.5 million, thanks mostly to his residency at Las Vegas’ Mirage Hotel, which fattens his wallet to the tune of $20 million a year.

“Parks and Recreation” alum Aziz Ansari took sixth place with $9.5 million. Much of that was the seven-figure advance he received for his book “Modern Romance.”

With $9 million, Louis C.K. was seventh, for which he can thank his FX series “Louie” as well as coffer-stuffing deals with Netflix.

“Gabriel Iglesias” is living large at Number 8 on the list with $8.5 million, thanks to a heavy-duty tour schedule and film appearances.

Dave Chappelle who recently returned to touring and appears in the Spike Lee movie “Chi-Raq,” rounded out the list with $7.5 million.