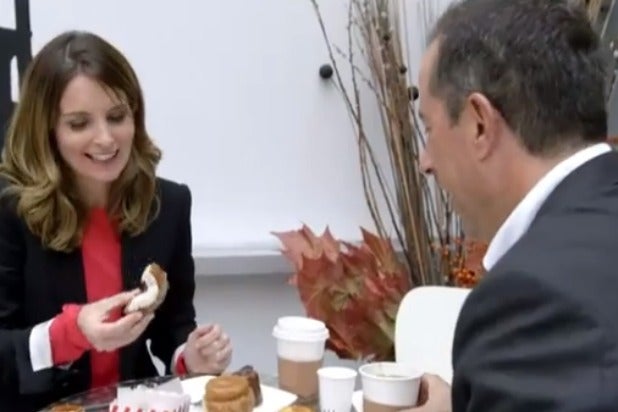 Nothing goes better with coffee than donuts, as Jerry Seinfeld says about the disemboweled confections in his first “Single Shot,” a spinoff from his successful web series “Comedians in Cars Getting Coffee.”

While “Cars” features Seinfeld and one other comedian talking about many things, “Single Shot” features several comedians covering one topic. In the premiere episode, that something is donuts, and those discussing them are Tina Fey, Brian Regan, and Sarah Silverman.

“If you’re a fan of ‘Comedians in Cars Getting Coffee,’ we have just made a new version of the show and it’s called ‘Single Shots,’ like a little espresso,” Seinfeld said. “It’s a bunch of different comedians in a two-minute episode on one subject. Some stuff you may have heard, some stuff you’ve never heard, but we hope you like it.”

How much is there to say about donuts? Well, Seinfeld helpfully eats one in a way that sends “glazed shavings” upward. One lands between his eyebrows, giving Regan some comedic material. And Fey demonstrates her passing familiarity with cronuts.

You can watch the video here.