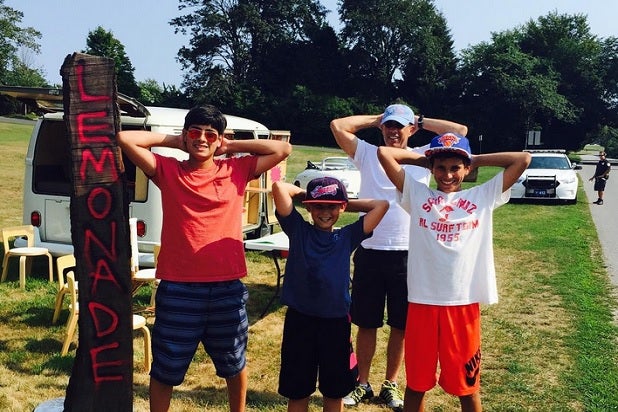 Jerry Seinfeld‘s ambition has once again been hobbled by an increasingly uptight society.

The comedian, who recently made headlines with his complaints about the politically correct atmosphere on college campuses, found himself on the wrong side of the law recently after attempting to peddle lemonade for charity.

A drink stand set up by Seinfeld and his family in East Hampton was shut down after the cops showed up, apparently at the behest of a neighbor, the New York Post reports.

Despite the sour outcome, Seinfeld still managed to have some fun with the situation. The comedian’s wife Jessica posted a photo of Seinfeld and his accomplices posing with their hands behind their heads, with a cop and his cruiser looming ominously in the background.

“Lemonade dreams crushed by local neighbor but not before raising lots of money for @loverecycled,” she captioned the photo. “Thanks to all of our customers and big tippers! [T]hanks Xander and Jaden for crushing it today with Julian and Jerry.”

The lemonade stand was raising funds for Jessica Seinfeld’s organization Baby Buggy, which provides clothing, gear and services to families in need nationwide.

That sort of do-gooding can really work up a person’s thirst. Luckily they probably had plenty of lemonade left over after getting shut down by The Man.