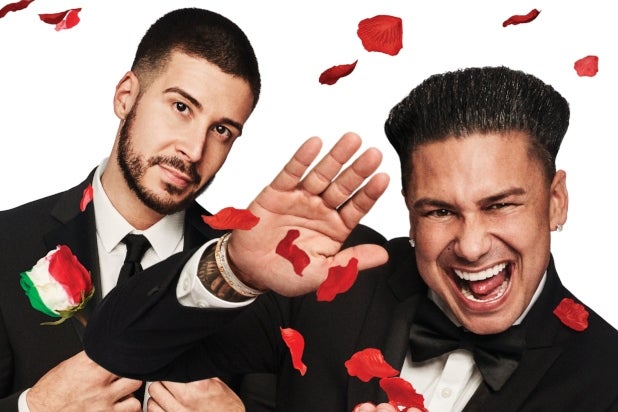 Following the success of “Double Shot at Love,” the “Jersey Shore” duo of Paul Delvecchio (DJ Pauly D) and Vinny Guadagnino will star in a new docuseries for MTV set in Las Vegas.

The show has a working title of “DJ Pauly D and Vinny’s Vegas Pool Party.” It is currently in production and is expected to debut in 2020.

The series is described as following the dynamic duo as they takeover Las Vegas and give their friends a shot at the Vegas life.  Between Pauly D’s successful DJ residency and Vinny entertaining the masses on the strip, the two will help teach their friends the definition of work hard, play hard in the infamous Sin City.

Season 3 of “Jersey Shore Family Vacation” is currently airing on Thursdays — or Jerzdays, depending on who you ask. Season 3 finds Mike “The Situation” Sorrentino facing prison time as he plans his wedding, while Deena prepares to give birth, Jenni teeters on the edge of divorce, Ronnie gets tired of being the butt of everyone’s jokes, and Pauly gets crafty with ideas for a wedding prank.

“Double Shot at Love” wrapped in June, and though both Vinny and Pauly tried sincerely to find love, both walked away empty-handed in the end. Read the explanation Vinny gave us on why things didn’t work out with Alysse here.