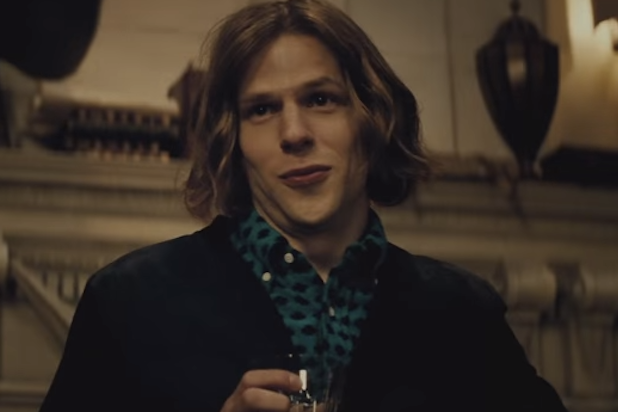 As much as “Batman v Superman: Dawn of Justice” bore the brunt of widespread scorn, Jesse Eisenberg may have gotten it the worst after a groundswell of fans rejected his portrayal of villain Lex Luthor in the Warner Bros. springtime superhero movie.

The 32-year-old “Social Network” star hasn’t spoken much about the negative reaction to his performance in the Zack Snyder film until this weekend, when he told fans at MCM London Comic Con that he will reprise his role in Snyder’s upcoming Justice League movies.

As “Justice League” has begun filming in London, Eisenberg said he is simply awaiting the call to head to the set. “I’m kind of like waiting for my crack at it,” he said.

“I don’t know what I’m allowed to say, because I feel like there’s probably some drone following me from DC, and if I say anything wrong I get, you know, picked off. But yeah I think so, and I love it, and I love everybody who’s in it. You know, it’s a really talented group of people.”

Eisenberg went on to discuss his DC Film villain’s underpinnings and that he wanted Luthor to be more than a one-dimensional baddie.

“What I wanted to do with the character is… to humanise these people that you have seen… dehumanized,” he said.

“I wanted to make these people real and relatable and interesting and engaging, not just, you know, a surface bad person,” he went on to say. “To me, the most interesting acting is when actors can bring you into that other side of the person. When you feel like you are not just seeing the kind of purpose of them for plot. That they are not just delivering a message. They’re actually showing you humanity. And that’s what I tried to do with that character. Whether or not I succeeded or failed depends on your subjective opinion on what you think of people like that. That’s my goal as an actor.”

Fans expressed disdain over his youthful Luthor — a character who has always been portrayed as bald — who had a full head of long hair. They also complained about his awkward jokes, a trait not shared with the classically stoic Luthor. They also didn’t like that Luthor was young in “Batman v Superman,” and, instead, campaigned for someone like Bryan Cranston to assume the role.