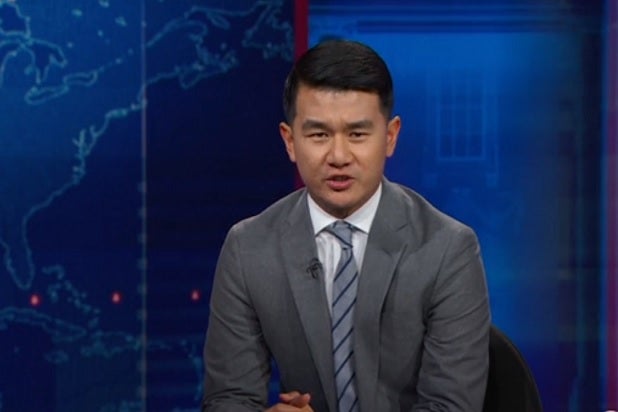 Fox News correspondent Jesse Watters got a major earful from “The Daily Show’s” Ronny Chieng over Watters’ controversial Chinatown segment, which was deemed racist by many angry viewers.

“Let me get this straight, they say China in the debate, so you go to Chinatown in New York? So when they mention Mexico, do you send someone to Taco Bell?” Chieng said. “That’s like if they brought up women’s rights so I sent someone to Fox News to get some opinions.”

Chieng played unedited clips from the Fox News segment, which saw Watters ask people if he needed to bow before speaking to them, if they knew karate, and if this is the year of the dragon. “”No, it’s actually the year of go f—yourself!” Chieng said.

Chieng also took Watters to task for featuring elderly Chinese people who did not speak English in his segment, accusing him of mocking them by asking questions in English they couldn’t answer.

So, Chieng decided to do his own Chinatown segment, in which he spoke with people in both Chinese and English. Not surprisingly, several people he spoke to were able to offer some very interesting perspectives on the current election cycle — and offer a few harsh words about Watters.