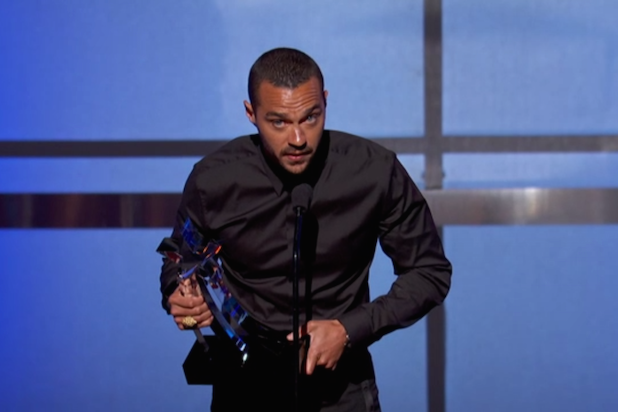 It appears the call to fire Jesse Williams from “Grey’s Anatomy” isn’t going away any time soon.

In fact, a Change.org petition demanding ABC and Shondaland off another doctor now sports nearly 20,000 signatures — that’s roughly four times the support it had just 24 hours ago, when the signatory total was just south of 5,000 names. Since gaining momentum and attention, creator Erin Smith has since updated her online stance — twice.

“Update: Unfortunately, a necessary escalation is warranted,” she wrote most recently. “Please sign the petition to fire Jesse Williams from Grey’s Anatomy AND boycott the entire ABC Network. Don’t forget to unlike all ABC programs/shows on Facebook pages, unfollow all on Twitter and separate from all social media that has anything to do with ABC, their shows, news, etc.”

Below is the rest of Smith’s newest words. Read her original petition here, where you can also watch a portion of Williams’ controversial BET Awards speech.

Explanation: Upon receiving a humanitarian award at the BET awards, Jesse Williams released a cascade of inappropriate, unprofessional and racist commentary against police officers and Caucasians. Had any one of his offensive words been said by any other race other than an African American, they would’ve been publicly shamed, fired from whatever job they had, lost endorsements, advertisers, etc. Shonda Rhymes praised Jesse’s speech on Twitter. This petition to fire Jesse Williams was created. Then, Shonda recently tweeted “Um, people? Boo don’t need a petition. #shondalandrules”.

This is a blatant slap in the face to the entire human race. Shonda not only praised him, but she condones his actions. Obviously, she has no intention of enforcing #EqualConsequences4RacistBehavior and chooses to be a hypocrite. She’s fired other people for less infractions. She chose to applaud Jesse’s tirade instead of taking affirmative action and neutralize the situation.

Jesse couldn’t issue a simple apology? A true “humanitarian” would never have created this situation to begin with, but at least he could’ve admitted to using his words poorly, apologized and rephrased so all of this could have gone away. I’m shocked that someone who wants equality would spew such divisive rhetoric. Jesse is dividing rather than unifying. Everyone should be encouraging Unity. Double standards should not exist. Apparently, Shonda thinks this is her world and she can do whatever she wants. Jesse’s rant only fuels racism and further divides Americans. All races must unify and take a stand against this.

I will not tolerate the blatant disrespect to all ethnicities. I will not stand by and watch this hypocrisy continue.  I will not let this effect the future of our children, grandchildren, great-grandchildren, friends, family, my neighbors and especially police officers. I’ve been “sitting down” too long. This time, Jesse needs to “sit down” and contemplate the violence he fostered against all races and police officers.

I am a long-time, loyal viewer of the ABC Network. I never miss Good Morning America or World News. I have been watching all of Shonda’s shows since day 1 and it kills me to make this stand, but it’s a necessary evil. It’s time to venture out and find new shows that are not on ABC. It will be hard, but it’s the only way to force them to make a change. Join me! Thank you for your continued support in stopping racism. #AllLivesMatter

Do not promote empty people & their tantrums. Pure clickbait to gain followers, attention & money, for themselves, not you. Never you.

In support of her star, “Grey’s” creator Shonda Rhimes retweeted Williams’ post, and then wrote: