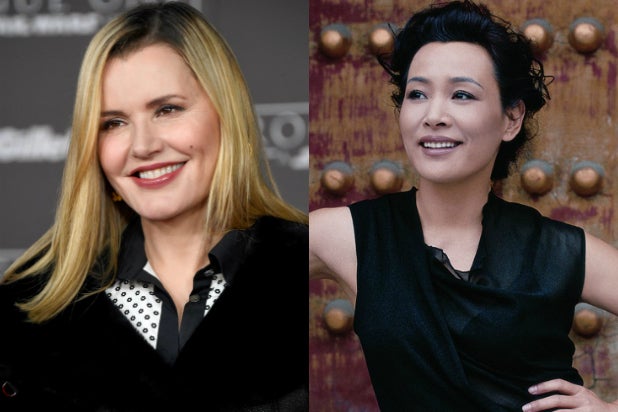 The plot for the film is being kept under wraps, but the production companies on the project, Voltage Pictures and Freckle Films, describe it as a character-driven action-drama.

“Eve” is being directed by “The Help” and “Winter’s Bone” director Tate Taylor, who took over the project in August after Matthew Newton exited the project after fans resurfaced accusations of domestic abuse made against him in the past.

Principal photography on “Eve” began in Boston on Sept. 24.

Davis’ credits include “The Fly,” “Beetlejuice,” “Thelma & Louise,” “A League of Their Own” and “The Accidental Tourist,” for which she won the Oscar for Best Supporting Actress.

Chen recently starred in Netflix’s series, “Marco Polo” and just wrapped “Tigertail,” a Netflix film directed by starring Alan Yang (“Master of None”) as well as John Cho. Chen is probably best known for her role on the original “Twin Peaks.”

Chen is repped by Inphenate and attorney Stuart Rosenthal.

Voltage will fully finance “Eve” and handle worldwide sales. Nicolas Chartier and Dominic Rustam are producing for Voltage, alongside Chastain and Kelly Carmichael who are producing for Freckle Films. Jonathan Deckter, John Norris, Erika Hampson, and William Earon are serving as executive producers.