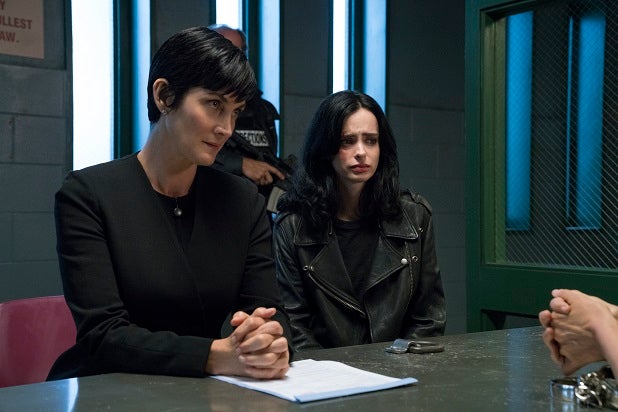 (Note: This post contains spoilers for the second half of “Jessica Jones” Season 2.)

“Jessica Jones” Season 2 on Netflix involves the titular hard-drinking private eye searching for answers about her past — specifically, how she wound up with her powers in the first place.

The investigation brings Jessica (Krysten Ritter) new information about IGH, the organization from Season 1 that created the Combat Enhancer drug that caused Will Simpson (Wil Tanan) to lose his mind. Jessica discovers that IGH experimented on her after the car accident she was in as a child, which killed her family. She also discovers that she isn’t the only person IGH was experimenting on.

When Jessica finds and tries to stop the killer known as Alisa (Janet McTeer), another superpowered person created by IGH, she and the authorities starting thinking about where they can keep a woman who can bend steel and punch through walls. Jessica repeatedly mentions “The Raft” as one distinct possibility. That term might sound familiar if you’ve been an avid follower of the Marvel Cinematic Universe — it’s the name of a location that’s come up before.

The Raft is a super maximum security prison built specifically to deal with super individuals. Located in the middle of the Atlantic Ocean, the Raft is extremely isolated and apparently includes cells strong enough to hold superpowered individuals.

We don’t actually see the Raft in “Jessica Jones” Season 2, but we have seen it before. The prison was a major location in “Captain America: Civil War.” That movie sees the Avengers being pressured to sign the UN’s “Sokovia Accords,” which create laws and oversight governing how the superhero team can act and what it can do. Through the course of the movie, Captain America (Chris Evans) and the superfolks supporting him, who disagree with the Accords, wind up clashing with Iron Man (Robert Downey Jr.) his super backers. Eventually, Captain America’s teammates lose the fight in order to give Cap time to escape and go after the bigger threat.

But after the Accords are signed, doing superhero stuff without legal sanction is a crime. So in “Civil War,” we see the Scarlet Witch (Elizabeth Olsen), Hawkeye (Jeremy Renner), Falcon (Anthony Mackey) and Ant-Man (Paul Rudd) imprisoned in the Raft, under the supervision of Gen. Thaddeus Ross (William Hurt) — until Cap breaks them out.

With the Avengers rescued from the prison, we don’t know who or how many super people the Raft might actually be holding. It doesn’t sound like a place you want to end up, though. According to “Jessica Jones,” prisoners there are kept in solitary confinement for 23 hours a day, and given that the facility is in the middle of the ocean, there’s no chance for visits from the outside world.