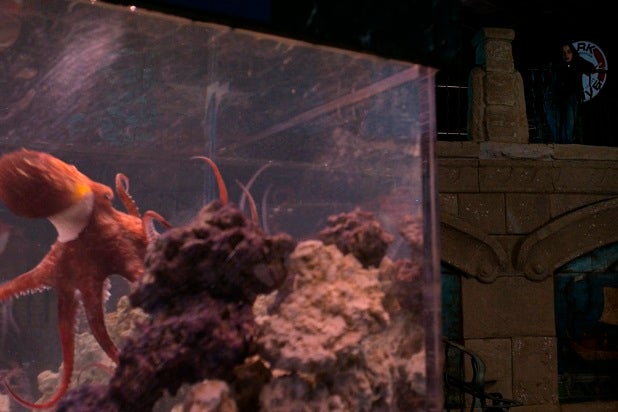 As the second season of “Jessica Jones” approaches its midpoint, Jessica finds a man who gives her some key information about the shadowy organization that experimented on her, IGH. Her interview also turns up some fun facts — specifically, about octopuses.

In Episode 5, after investigating a man named Dave (Daniel Everidge), who confessed to a murder he didn’t commit apparently at IGH’s behest, Jessica (Krysten Ritter) learns that one of the scientists at IGH has a fondness for octopuses. Those are David’s favorite animals as well, and he drops some knowledge about the creatures: That they have no bones, for instance, and that a 600-pound octopus “can fit through a hole the size of a quarter. (Turns out, they can.) They’re solitary (true) and don’t care for their babies (also true).

Also Read: 'Jessica Jones': What the Hell is IGH, and Who is Dr. Kozlov?

Dave also tells Jessica that “no other DNA is like an octopus,” and that “no one knows where their genes come from,” and that they’re called “de novo, which means ‘out of nowhere.'”

That part is true, too — octopus DNA is rather weird. In fact, when the octopus genome was sequenced in 2015, it led some scientists to describe it as alien because it was so different from what we normally see in animals.

Usually, animals that are related in evolution share a lot of DNA, but octopuses have hundreds of genes that don’t appear in any other animals, including other mollusks. And octopuses also have more genes that code proteins than humans do: 33,000 compared to fewer than 27,000 in humans.

There’s also another interesting adaptation in octopuses and related species. It’s part of how DNA works. DNA is a series of coded instructions that are used to create proteins. A “gene” is a group of these instructions to create one specific protein, and that’s done by a molecule called RNA, which faithfully translates the DNA code to create the protein molecule.

At least, that’s how it works for most animals. But the cells of octopuses and similar creatures have the ability to edit their RNA, rather than just translating it into proteins. That means that octopus genes can be even more variable than that of other animals, allowing them to change proteins as their environment changes — like altering a protein with changes in weather, so it works at other temperatures.

There’s one last octopus factoid that “Jessica Jones” mentions, which comes later in the episode. As Jessica is looking for the IGH doctor Dave told her about, she gives a little voice over “fun fact” about octopuses, noting that they’ll lose and abandon an injured arm.

Also Read: 'Jessica Jones': Everything You Need to Remember, From Season 1 to 'The Defenders'

That’s also true. Octopuses can regenerate their lost arms with no loss of function, unlike when a lizard loses its tail. Octopus squids can also detach arms altogether as a way of escaping predators. After hooking its arms to a predator, the octopus squid leaves them attached and wiggling as it jets away to escape.

“Jessica Jones” might mostly be a fictional story about super people doing super things, but Season 2 is also educational — as least when it comes to some handy facts about cephalopods.