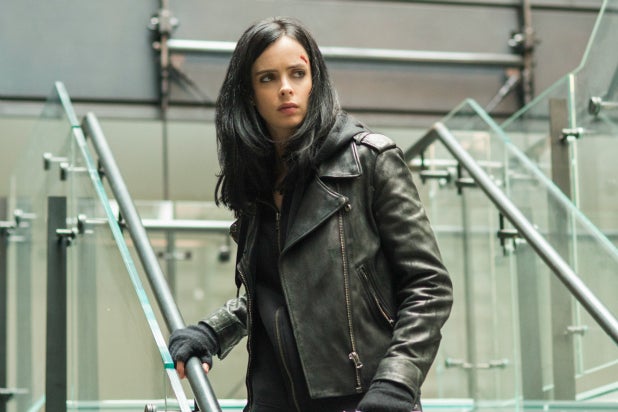 As they proved earlier this year with “Daredevil,” Marvel is taking its deal with Netflix for multiple series and using the opportunity to go darker and more violent than the Disney-fied blockbuster “Avengers” films would allow. And it’s not pulling back from that approach with “Jessica Jones,” the second Netflix-produced series based on one of the imprint’s darker comic properties.

We kick off with Jones (Krysten Ritter) in full-on noir P.I. mode, with all the cynical narration, harsh language and surreptitiously photographed boinking you could ask for in a comic book series. Visually, this is very much the Manhattan of “Daredevil” — which makes sense, as the heroes of both series are set to team up in the upcoming “Defenders.” The frames are confidently filled with mostly darkness, only the most necessary edges of detail illuminated as Jones skulks through the city chasing down leads and dodging her own demons.

Ritter herself is something of a revelation, dismissed previously as a broad comic actress thanks to her work in “Don’t Trust the B in Apt. 23.” But she more than holds her own as the sharp-tongued former superhero with a heavy tinge of darkness to her. Jones is witty, clever and resourceful, but she’s also hard-drinking, dour and doing a terrible job of masking a heavy emotional burden. It’s a complex protagonist, the kind we don’t see enough of on television or in studio films. She’s moody and funny and incredibly relatable — until, that is, she lifts up a car or throws a guy through a wall.

As far as an antagonist, Jones is given plenty to contend with in the form of the mind control-happy, purple-loving Kilgrave (David Tennant), who taunts Jones incessantly. While he was an endearingly heroic Doctor Who, Tennant menaces like nobody’s business and might be better suited for villainy, as it turns out.

There also might not be a better screen couple this year than Ritter and Mike Colter as strong-armed bartender and comics favorite Luke Cage. Of course an alcoholic and a bartender make a great pair. Watching them flirt is one of the show’s more distinct pleasures.

While the Marvel films — and the superhero boom of the last decade in general — have leaned towards the idea of creating comic book material for adults to enjoy, this series feels like the first superhero show really just for grown-ups — and it totally works.