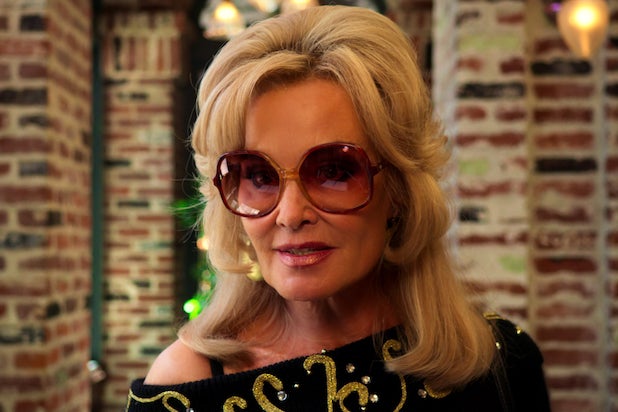 Jessica Lange rejoined Ryan Murphy’s troupe of actors for his new Netflix series “The Politician” in what is possibly the most outlandish role she’s played in Murphyland to date. But maybe you had already guessed that based the latest teaser, which dropped during Sunday’s Primetime Emmy Awards and featured Lange’s character saying she “might have psychological problems.”

“Well it’s a good thing it’s a comedy, because she’s completely nuts,” Lange told TheWrap of Dusty Jackson, the grandmother to Infinity Jackson (Zoey Deutch) on the satirical series, which launches on the streaming service Friday.

“Yeah, it’s out there,” the “American Horror Story” alum said. “She’s an extreme character. I have to say, what she does and how she thinks, her actions. I don’t honestly know how much I can tell you about it because I understand they are trying to keep it a little bit under wraps until it comes out. But again, Ryan, I have to say, he created a very big character for me to play, even though it’s very much a supporting role, the main story are the kids and what’s happening in their lives. And my character is kind of tangential to that. But it was a classic Ryan Murphy character. Very interesting to create.”

The “main story” Lange is referring to is this:

Payton Hobart (Ben Platt), a wealthy student from Santa Barbara, California, has known since age seven that he’s going to be President of the United States. But first he’ll have to navigate the most treacherous political landscape of all: Saint Sebastian High School. To get elected Student Body President, secure a spot at Harvard, and stay on his singular path to success, Payton will have to outsmart his ruthless classmates without sacrificing his own morality and carefully crafted image. Created by Ryan Murphy, Brad Falchuk and Ian Brennan, “The Politician” offers a comedic and satirical glimpse into just what it takes to make a politician.

“The Politician” launches Sept. 27 on Netflix