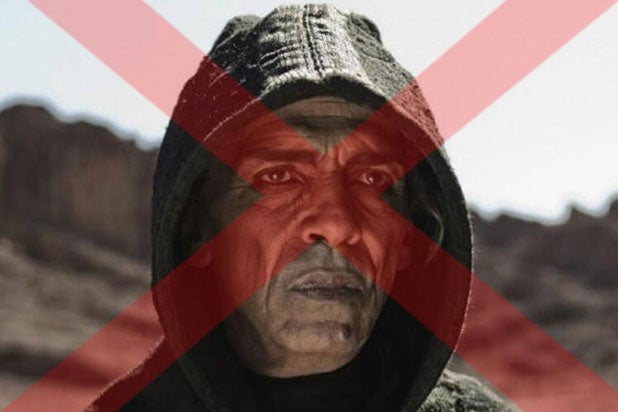 “Son of God” producers Mark Burnett and Roma Downey have cast Satan out of their upcoming Biblical epic about Jesus Christ, an individual familiar with the 20th Century Fox project has told TheWrap.

“Son of God” is a reshaped version of last year’s hit History Channel miniseries “The Bible,” which co-starred Mohamen Mehdi Ouazanni as Satan. Burnett and Downey came under fire last year because Ouazanni bears a striking resemblance to President Barack Obama, though the producers said at the time that the casting controversy was unintentional and merely coincidental.

“Someone made a comment that the actor who played the devil vaguely resembled our president, and suddenly the media went nuts,” Downey said in a statement Monday. “The next day, when I was sure everyone would only be talking about Jesus, they were talking about Satan instead. For our movie, ‘Son of God,’ I wanted all of the focus to be on Jesus. I want his name to be on the lips of everyone who sees this movie, so we cast Satan out. It gives me great pleasure to tell you that the devil is on the cutting room floor.”

20th Century Fox will release “Son of God” on Feb. 28. The 10-hour miniseries has been pared down to two hours, which meant sacrificing Satan’s scenes to focus on Jesus.

The end of February has proven to be a lucrative time of year for faith-based movies, as “The Passion of the Christ” earned $125 million in its first five days after opening on Wednesday, Feb. 25, 2004.