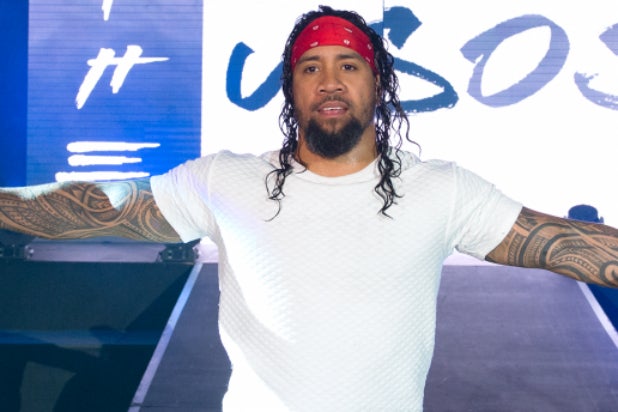 A booking officer in Hidalgo County told TheWrap that the wrestler, whose real name is Joshua Samuel Fatu, was arrested on Sunday. He signed a personal recognizance bond for his own release.

“Joshua Fatu is responsible for his own personal actions,” a WWE spokesperson toldTheWrap. “We are investigating the matter and awaiting information from local law enforcement officials.”

Fatu was in the area for a house show, in which he and his twin brother Jimmy defeated the team of Rusev/Aiden English and The Bludgeon Brothers in a Triple Threat Tag Team Match. Jimmy Uso — real-name Jonathan Solofa Fatu — has faced similar charges in the past.

The Usos are scheduled to defend their Tag Team Titles against Chad Gable and Shelton Benjamin in a 2-out-of-3-Falls Match later this month at pay-per-view event, The Royal Rumble. As Tag Team Champions with a big upcoming match to plug, fans still got to see The Usos Tuesday night on “SmackDown Live” from Laredo, Texas, despite the arrest.

Jey and Jimmy are something of professional wrestling royalty. They are the sons of former WWE Hall-of-Famer Rakishi, and as part of the Anoaʻi family are related to Roman Reigns, Dwayne “The Rock” Johnson, Umaga, Yokozuna, Jimmy “Superfly” Snuka and Tamina Snuka.

Jonathan — A.K.A. Jimmy — is married to WWE Superstar Naomi.

“SmackDown Live” airs Tuesday nights at 8/7c on USA Network. The Royal Rumble is set for Sunday, Jan. 28 on the WWE Network.