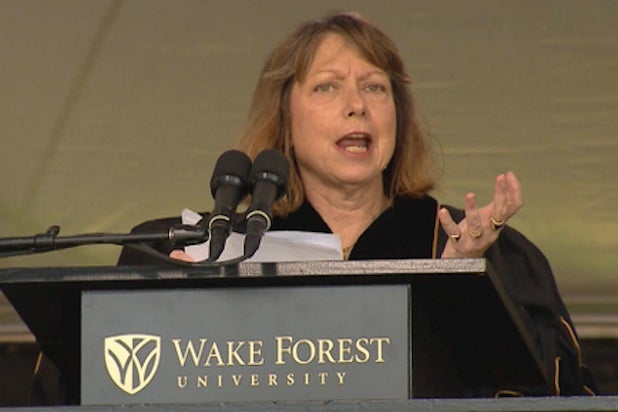 Jill Abramson made her first public appearance since being fired as executive editor at the New York Times, giving a commencement address Monday to graduating students at Wake Forest University.

“I think the only real news here today is your graduation from this great university,” Abramson said. “First of all, congratulations, I’m impressed that your achievements have attracted so much media attention, as well they should.”

“Sure, losing a job you love hurts,” Abramson said. “But the work I revere — journalism that holds powerful institutions and people accountable — are what makes our democracy so resilient — this is the work I’ll very much remain a part of.”

“What’s next for me? I don’t know,” Abramson said. “So in that way, I’m in the same boat as many of you. And like you I’m a little scared but also excited.”

Abramson nonetheless paid tribute to the Times and said it was “the honor of my life to lead the newsroom.” She added: “New York Times journalists risk their lives frequently to bring you the best news report in the world. That’s why it is such an important and irreplaceable institution.”

She also addressed the Times’ “T” she has tattooed on her back. “Not a chance” she’s getting that removed, she said.

Abramson quoted a passage from Robert Frost’s Colby College commencement address that described life after college as “pieces of knitting to go on with.”

“My mother was a great knitter, and she made some really magnificent things, but she also made a few itchy, frankly hideous sweaters for me,” Abramson said. “She left some things unfinished. So today, you gorgeous, brilliant people, get on with your knitting.”