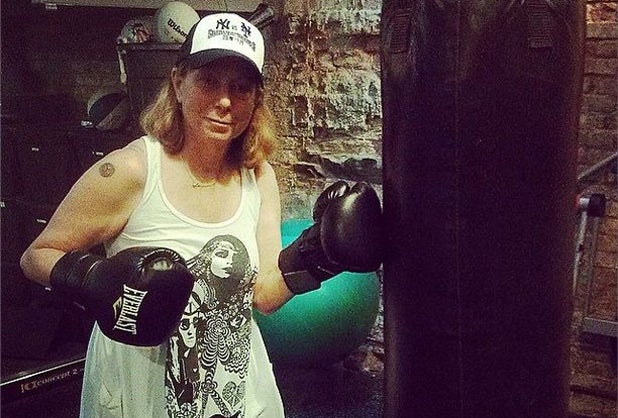 Why are women everywhere so exercised over the firing of Jill Abramson as executive editor of The New York Times?

Women — and some men too — have taken to the public square with stunning speed and intensity. Donna Brazile, Lena Dunham and Arianna Huffington are among those crying foul on social media.

The message they’ve taken from this incident is that Abramson was canned for being a woman.

Huffpo’s home page led with the story Wednesday afternoon, and the site soon published a story titled “A Sexist Explanation for Why the New York Times Just Fired Its Top Editor.”

Fair? True? It hardly matters. Abramson’s abrupt firing has struck a chord, one that is deeply familiar to women with brains and ambition. And it will have longstanding implications within The New York Times.

As for Abramson, she took to the gym Thursday to work out her frustrations, per her daughter, who posted a picture of her on Instagram, with the words: “Mom’s badass new hobby.” (See above.)

But first, it’s the rest of the media that rushed to express outrage.

The Atlantic had this juicy attitude in its headline: “Jill Abramson and the ‘Narrow Band’ of Acceptable Female Behavior,” and went on to explain that “One reason the former executive editor of the Times wasn’t well-liked is because “aggressive” female leaders rarely are.”

Vox’s headline was similarly snide: “What happened to Jill Abramson shows everything that sucks about being a woman leader.”

The common ground in all of these protests is that the notion that Abramson confronted New York Times publisher Arthur Sulzberger over not receiving equal pay to her predecessor Bill Keller, rings terribly true. Even if it isn’t.

The New York Times has flat-out denied it. To that denial, you get a tweet like this one:

“Guys, you see so many women who instantly believe that Jill Abramson pay story because we could tell you near-identical stories ourselves,” writer Farran Nehme tweeted Wednesday afternoon.

Then there’s the fact that Abramson was perceived as “pushy” or “aggressive,” which strikes too many women as the same-old double standard. Are we still dealing with this crap?

From the executive editor of BuzzFeed Doree Shafrir: “Job note to self: pushiness bad, punching walls good.” (This referred to the description of Abramson as “pushy,” and to nice guy Dean Baquet losing his temper and punching a wall after a disagreement with her.)

The comments reflect a disheartened female elite in this country. The people tweeting and sharing are highly educated, accomplished women who bring their own experiences to bear on this story, whether they know or like Abramson personally.

The social media outrage reflects a deep well of dissatisfaction over the opportunities for high-achieving women in this country. Even as we observe the abysmal treatment of women and girls in developing parts of the world we see precious little change around the token female leaders across our society.

And within the New York Times, I have no doubt this development is actively destabilizing a generation of capable women. I’m thinking hard about how it feels to be the women in that newsroom who have fought hard for their place at the table, which is — despite everything — predominantly male.  (I won’t name them, you know who you are.)

The next time an opportunity comes up for them at a sexy, digital media outlet, they will remember this and think hard. The next time The Times goes after the sharpest young woman out of a midsize media outlet, she will consider the alternatives. The Times has already bled too much talent of late (David Pogue, Brian Stelter, Nate Silver) to lose its appeal among top women.

Why Jill Abramson was fired. A disheartening read as a young, female journalist. http://t.co/uksxLhNydG

In her Atlantic story, Olga Khazan used the moment to delve once again into the cultural research suggesting that:

…there is a “narrow band of acceptable behavior” for women leaders–actions that are not too feminine, but not overly masculine, either. This is the idea behind Sheryl Sandberg’s advice that women should “smile– even when they don’t feel like it” and substitute “we for I” whenever possible.

Those of us who are women in the media have always wanted to believe that this profession is a meritocracy. (I try hard not to speak for all women here. But I probably do.)

As I’ve spent one decade after another swimming in that supposed meritocracy, I’ve realized that it is not the case. Women have to fight hard to get noticed, and be promoted. The Los Angeles Times is another place that has earned a bad reputation among women, as one senior editor or manager – Julie Marquis among others – after another has left the place amid whispers of lack of respect.

Jill Abramson may well have been a terrible manager. Arthur Sulzberger, now on his fourth editor since 2001, owns and runs the place and he can choose the leader he wants for the newsroom. At some point, this all comes to roost on his desk.

Editor’s note: An earlier version of this story mistakenly stated that Beth Shuster had left the L.A. Times. TheWrap regrets the error.