The decision to adapt “I Love Dick” by Chris Kraus into a TV show for Amazon was a no-brainer. And it couldn’t have come at a better time — or as co-creator Jill Soloway said: “the perfect time.”

“I Love Dick” is a lot of things — a show about a guy named Dick and also about dicks … and how he is one — but at its core, it’s about women, queer people and how they learn to express their desires, either through sex or creativity. It prioritizes the underrepresented voices in media and puts them and their lust at the forefront, something few shows nowadays do. According to Soloway and co-creator Sarah Gubbins, the show’s focus provides a lens for women and other groups to see themselves portrayed in a different matter: not as objects but as subjects.

“Women are just filled with rage,” Soloway (who uses gender-neutral pronouns), told TheWrap. “I think women are so rageful right now because of the election, that it’s the perfect moment for them to turn on their TV and have their rage focused on.”

Also Read: Get Obsessed with Kevin Bacon in the First Trailer for 'I Love Dick' (Video)

“I Love Dick” tells the story of a woman named Chris Kraus (Kathryn Hahn) — based on the author herself — who becomes infatuated with a man called Dick and begins writing letters to him. The book has a non-traditional framework that combines fictional elements with real-world characters while interjecting observations about culture, philosophy and academia. The show, meanwhile, gives this premise more of a structure — identifying the titular Dick (Kevin Bacon) by giving him a back story and a turning him into a cowboy; delving into the relationship more between Chris and her husband Sylvère (Griffin Dunn); and offering insight into the lives of the people around them.

The core of the story, however, revolves less around Dick and more around how each of the characters reacts to what Dick represents. Bacon’s character is the target of the rampant female gaze, becoming an object for people to bounce their own ideals and perspectives off of. Chris, for example, uses Dick to explore her own need for sex and to help express her latent desire. Meanwhile Devon — Chris’ genderqueer, gay neighbor — looks to Dick for tips on how to be masculine. 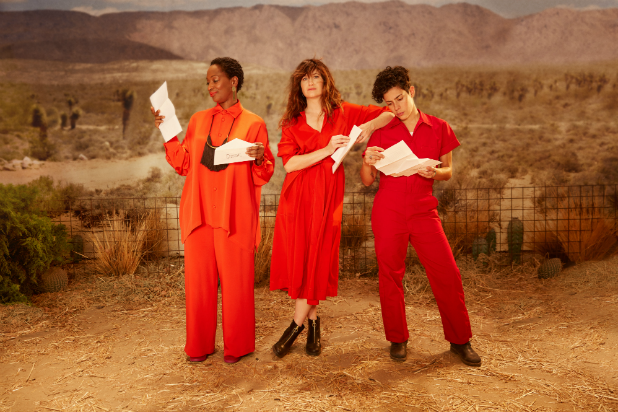 Soloway said that when women see themselves on TV, it’s mostly in terms of how attractive they are to the opposite sex. “I Love Dick” takes on a different strategy. For instance, the sex scenes are raw and gross. Bodily fluids are — with one of the characters getting a heavy period in an important moment — and you see all physical imperfections. It’s refreshing.

“It’s probably one of the important things that a woman can offer when you have the privilege of this international distribution: sharing with other women the idea of being a subject instead of an object,” Soloway said. “They watch it and they feel like they connect and they relate to her desire. They haven’t really seen things that reward female desire, particularly kind of ugly female desire.”

Also Read: 'I Love Dick' Fact Check: No, They Didn't Make Up That Idyllic Town

While it wasn’t an initial goal when adapting the book, developing “I Love Dick” into a show created a platform where Gubbins, Soloway and the other writers could project things they wanted to see in media. This included a racially diverse cast, a wide range of sexual and gender identities, and a story that put women at the center — opposite of what could be seen as the status quo.

“I’m a queer woman and being able to bring part of my perspective to a character on television was absolutely important to me,” Gubbins said. “I couldn’t imagine not doing it.”

Both Gubbins and Soloway confirmed that it was a constant conversation to ensure that “I Love Dick” would depict these characters, despite its main characters being a straight white woman and two straight white men. The writer’s room was filled with people with different perspectives and while writing, it became a way to diversify the story and in Gubbins words, make it more interesting.

“I think it adds to the story and … it expands the comedy, frankly, to have different perspectives … It was how we conceived the show,” she added.

More than just servicing the story, it’s a goal in Soloway’s works to expand diversity.

“It’s an evolving process trying to have and wanting to have women of color, people of color, gender non-conforming and queer people in everything I do,” Soloway said. Because the show is about a white, middle class woman, they “definitely felt the responsibility to share multiple perspectives.”

So while “I Love Dick” is about many things, the main purpose was to create a show that showed off multiple points of view on sex, while also allowing its audience — primarily women and queer people — to see what they may experience.

This goes back to Gubbins and Soloway’s experiences while reading “I Love Dick” for the first time. Gubbins specifically noted she felt there was a universality to experiencing the overwhelming lust that Chris feels towards Dick and trying to figure out what that meant. Through the supporting characters, they were able to showcase other ones.

“You see yourself in the specificity of the story … there’s going to be something that’s so universally felt and understood,” Gubbins said.

Of course not every perspective is acknowledged, but the point was to showcase something hidden and omitted from a lot of media. The draw of “I Love Dick” isn’t in just thinking about Bacon in a sexual manner — as a lot of the marketing material suggests — but the fact it paints him as an object for its female lead to pine and grow emotionally over is worth noting. It’s especially important to see a story filled with female desire, queer people and people of color in an age where people are distressed about representation and worried even more about what government will do to them.

“I don’t specifically set out to tell that story, but I’m always happy to do it,” Soloway said.

“I Love Dick” is currently steaming on Amazon.