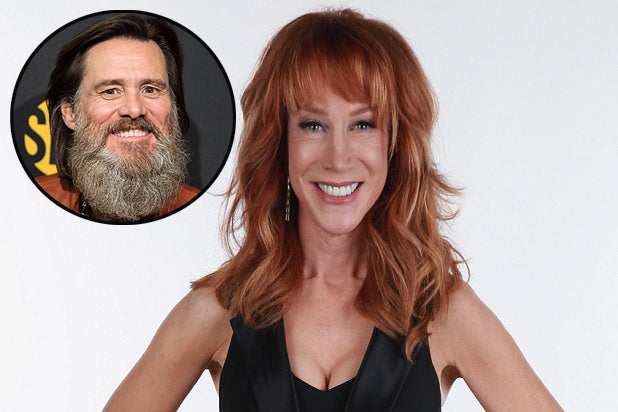 Kathy Griffin has gained another ally as she continues to weather the fallout from this week’s Donald Trump decapitation photo.

Jim Carrey came to Griffin’s defense on Wednesday, telling Entertainment Tonight that it’s Griffin’s role as a comedian to “cross the line at all times.”

“I think it is the job of a comedian to cross the line at all times — because that line is not real,” the “Dumb and Dumber” star said.

“If you step out into that spotlight and you’re doing the crazy things that [Trump is] doing … we’re the last line of defense. And really, the comedians are the last voice of truth in this whole thing. It’s impossible to get away from it,” Carrey added.

Carrey’s opinion appears to be in the minority. Griffin was axed from her gig as co-host of CNN’s “New Year’s  after the photo of her holding what appeared to be the bloody, decapitated head of President Trump surfaced, provoking widespread outrage. Toilet stool maker Squatty Potty likewise yanked an ad campaign featuring the comedian.

Griffin herself acknowledged the error of her ways, saying in an apology on Tuesday that she “went way too far” with the photo.

“I crossed the line,” Griffin said in a video post via Twitter. “I went way too far. The image is too disturbing, I understand how it offends people. It wasn’t funny. I get it. I’ve made a lot of mistakes in my career, I will continue. I ask for your forgiveness. Taking down the image. I’m going to ask the photographer to take down the image. And I beg for your forgiveness. I went too far. I made a mistake and I was wrong.”

Despite the widespread condemnation directed at Griffin, former CNN personality Larry King came to her defense on Thursday, chastising the network for terminating its relationship with her.

While acknowledging that the photo was in “terrible taste,” King said that he wouldn’t have 86’ed her, and neither would CNN founder Ted Turner.

Also Read: Who Is Standing by Kathy Griffin After Her Reviled Trump Photos?

“I feel sorry for Kathy. She’s my friend, she apologized, let it go,” King said in a video published by TMZ.

“They’re jumping all over her now … I would have kept her,” King continued. “It was a terrible mistake, no one feels sorrier than her, she’s apologized. CNN shouldn’t have let her go.”