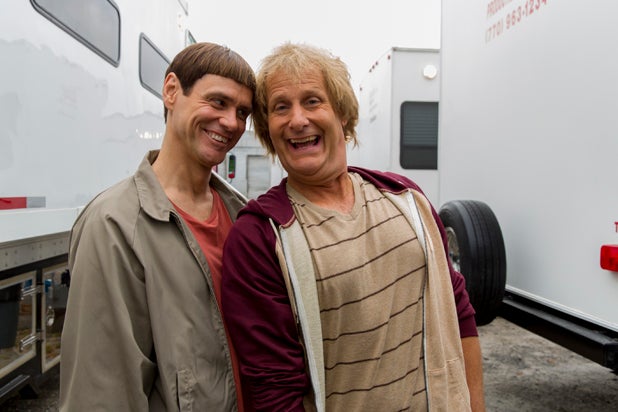 Fresh off his first Emmy win for Outstanding Lead Actor in a Drama Series, “Newsroom” star Jeff Daniels is dumbing himself down alongside co-star Jim Carrey in the first on-set picture from “Dumb and Dumber To.”

Carrey teased fans earlier this month with an image of Lloyd Christmas’ signature chipped tooth, but on Tuesday, he gave fans of the 1994 comedy, “Dumb and Dumber,” the first image of Christmas and Harry Dunne reunited through his WhoSay account.

Daniels tweeted a photo from the set, too, telling fans: “We’re Back!!! #DumbTo.”

And rest assured, they look as dumb as ever.

The sequel takes place 20 years after Harry and Lloyd turned down an opportunity to join Hawaiian Tropic bikini babes on tour as oil boys while wandering through the desert on their way home from Aspen.

This time around, the doofy duo will be searching for Harry’s illegitimate daughter who may be able to provide her father with a kidney transplant.

“The Walking Dead” alum Laurie Holden joins the cast along with Kathleen Turner.