Jim Carrey is hanging up the artist’s cap he has so worn for the past four years with his “political protest cartoons” that chronicled troubling events in the country, while also condemning President Donald Trump and his administration.

“For the past 4 yrs, among other commitments, I put considerable effort into this collection of political protest cartoons. It truly feels as though you and I have crossed an ocean of outrage together…but something tells me it’s time to rest my social media gavel and reclaim a little neurological bandwidth,” he wrote in a Saturday tweet that included an open-armed self-portrait of himself from around the time of his “Truman Show” days.

“If it seemed like I was ignoring my main Twitter followers here and outside the US and Canada in my quest to rid our democracy of ‘Orange Julius Caesar’ and his Empire of Lies, it was not my intention. I just assumed that a radicalized America is a threat to us all. When a madman grabs the wheel of the bus loaded with innocent passengers and threatens to drive it off a cliff, it tends to steal everyone’s focus.”

The lengthy statement was accompanied by a drawing of himself standing with opened arms in a doorway against a blue sky. “…in case I don’t see ya’…” the caption reads. Both the drawing and the quote are reminiscent of his 1998 film “The Truman Show.”

Carrey wrapped up his note with admiration of and gratitude for his fans, writing, “You always have and always will occupy a sacred space in my grateful heart. Thank You All kindly for your patience, your support, your humor, and your b.e.a.utiful fanart.”

When Carrey first expressing his political views via political cartoons on Twitter in August of 2017, he said he “became kind of an activist” for things he was seeing happening around him. And expressing those views frequently got him in trouble.

“There was a lot of pressure from my management: ‘Don’t mess this up. You’ve got goodwill in the world. People love you. You start talking about politics or whatever issues, you’re gonna lose half your audience.’ I say: lose them,” he told Vulture in a January 2019 interview.

“The hard part for me is stopping long enough to take care of the business of my life because once I get started, all plans go away. I’m free and that’s what art is for me. It’s presence and freedom in presence.” 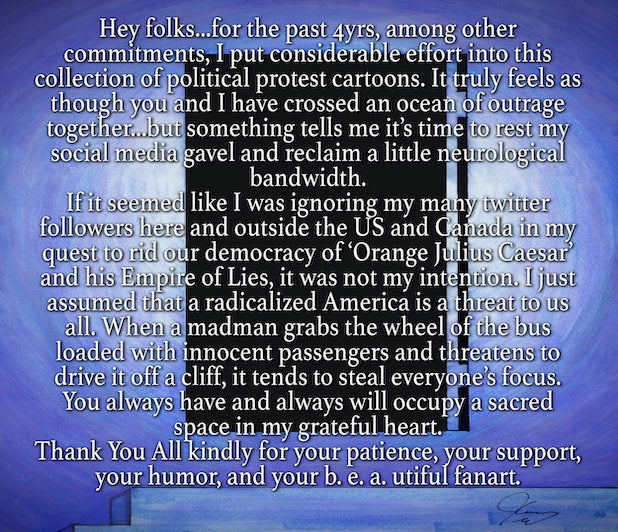