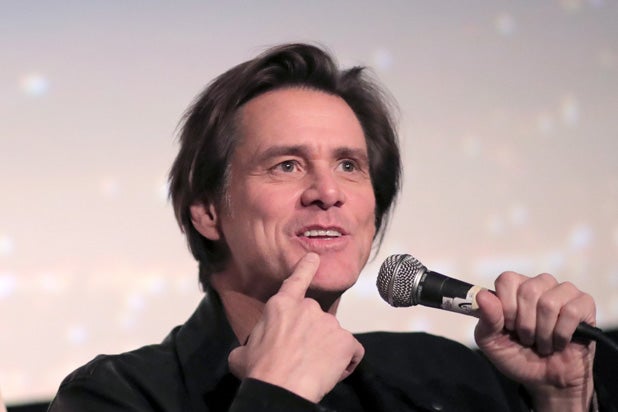 Jim Carrey clearly isn’t staying on the sidelines when it comes to the debate over Nike’s support of Colin Kaepernick.

On Wednesday, as the subject of Colin Kaepernick’s status as the new face of Nike’s “Just Do It” ad remained a hot one, actor-artist Carrey unveiled his latest artwork, thanking Nike with the the hashtag “#CapitalismWithAConscious.”

“Thank you @Nike for just doing it,” Carrey wrote.

The artwork featured former San Francisco 49ers quarterback Kaepernick in his now-famous kneeling position, as well as apparent nods to U.S. Olympic athletes raising their black-gloved fists at the 1968 games in Mexico City, as well as Jesse Owens’ triumphant performance at the 1936 Olympics in Nazi-era Berlin, Germany.

Carrey’s latest artwork came on the same day that Nike released its first “Just Do It” clip featuring Kaepermick, who gained notoriety in 2016 when he began kneeling during the national anthem before NFL games as a means of raising awareness and protesting racial inequality in America. The former QB has become persona non-grata among some fans, as well as the Trump administration, for his kneeling during the national anthem, which sparked a wave of player protests.

The clip, titled “Dream Crazy,” showcases an inspirational montage of athletes overcoming adversity to chase their dreams, with a voiceover by Kaepernick. He is also seen staring an image of the American flag in the ad. “Don’t ask if your dreams are crazy, ask if they’re crazy enough,” Kaepernick says at the end.