Jim Carrey hits the panic button in his latest objet d’art, depicting President Trump as a flaming, screaming asteroid headed for Earth and saying his presidency will become an “extinction level event.”

In his political cartoon posted Sunday, the actor/artist shows earth from space and a fireball with Trump’s malevolent-looking face speeding to the planet’s destruction. A swastika sits between his furrowed brows.

“Innocent people are now being slaughtered, families ruined and childrens’ lives destroyed. All in his name,” the caption reads. “If the Craven Republican Senate allows this vile miscreant to continue encouraging devisiveness, the ‘Trump Presidency’ will become an EXTINCTION LEVEL EVENT.”

In recent days, the Trump administration has pushed back at the suggestion that the president was to blame for the shooting at two New Zealand mosques that left 50 people dead Friday. In an 87-page manifesto, suspected shooter Brenton Harris Tarrant wrote that he supported Trump “as a symbol of renewed white identity and common purpose.”

White House chief of staff Mick Mulvaney countered that on “Fox News Sunday,” saying, “Let’s take what happened in New Zealand yesterday for what it is — a terrible, evil, tragic act — and figure out why those things are becoming more prevalent in the world. Is it Donald Trump? Absolutely not.”

Check out Carrey’s artwork below: 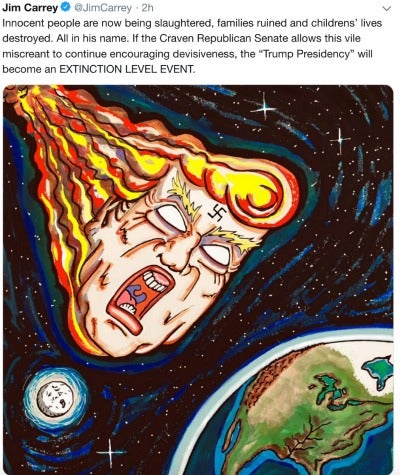