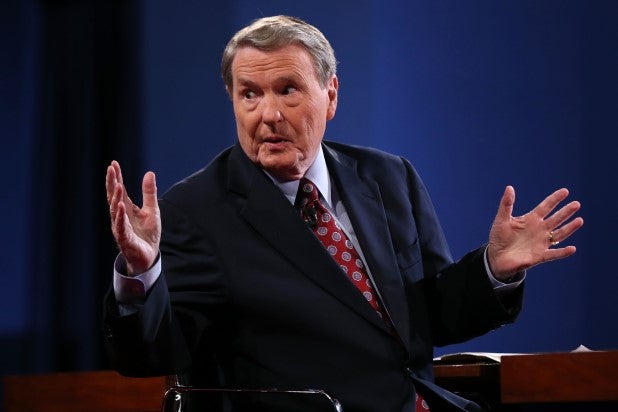 Jim Lehrer, the longtime anchor of “PBS NewsHour,” died Thursday, the network confirms. He was 85.

Lehrer rose to prominence in the 1970s anchoring “The MacNeil/Lehrer Report” with colleague Robert MacNeil. The program was renamed “PBS NewsHour” in 2009. Lehrer filled the anchor role for nearly four decades.

“It is with great sadness that I share the news that co-founder and longtime anchor of the ‘PBS NewsHour’ Jim Lehrer died today, Thursday, January 23, 2020, peacefully in his sleep at home,” Judy Woodruff, Lehrer’s colleague and current “PBS NewsHour” anchor, wrote in a statement.

“I’m heartbroken at the loss of someone who was central to my professional life, a mentor to me and someone whose friendship I’ve cherished for decades,” Woodruff added. “I’ve looked up to him as the standard for fair, probing and thoughtful journalism and I know countless others who feel the same way.”

Lehrer, born May 19, 1934, served as anchor of the NewsHour for 36 years before retiring in 2011. Lehrer and Robert MacNeil founded the program in 1975, out of their 1973 coverage of the Senate Watergate Hearings on PBS.

In a statement from PBS, network president Paula Kerger said that “on behalf of all of us at PBS, we are deeply saddened to learn of Jim Lehrer’s passing. From co-creating the groundbreaking MacNeil/Lehrer Report to skillfully moderating many presidential debates, Jim exemplified excellence in journalism throughout his extraordinary career. A true giant in news and public affairs, he leaves behind an incredible legacy that serves as an inspiration to us all. He will be missed.”

I am devastated to share news that my dear friend and cofounder of the @NEWSHOUR Jim Lehrer died today at home. Sending love to his Kate and their family. https://t.co/ZxNsCcaZBj