We’ve seen him lunching and breakfasting in New York but we didn’t really know for what reason. 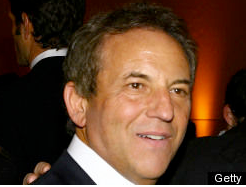 Now we learn: Jim Wiatt, departed from the Wiliam Morris chairmanship and banished to that dark place where former Hollywood power brokers go, has joined the board of AOL.

Here’s the press release from AOL, still in transition from its spinoff from Time Warner:

New Board Establishes Strong Foundation in Leadership and Governance with Diverse Range of Talents from Internet, Media, Marketing, Entertainment and Finance

NEW YORK, NY - AOL today named nine members to serve on its Board of Directors, drawing on leaders with expertise in Internet, Media, Entertainment and Marketing, as well as Finance. Among the directors named are: Richard Dalzell, Karen Dykstra, William Hambrecht, Patricia Mitchell, Michael Powell, Fredric Reynolds, James Stengel and Jim Wiatt. They will join the AOL Board when the separation from Time Warner is complete, with AOL CEO Tim Armstrong serving as Chairman of the Board.

"AOL is very fortunate to have an exceptional group of proven leaders to serve on our board of directors. AOL is on a mission to help create the future of media and content and the AOL Board will play a central part in helping us focus the strategy and also operate the company with the highest ethical standards," said Armstrong. "These individuals bring independent judgment and a dedication to building shareholder value, and they will be a tremendous resource for our company, our employees, and our future." Board members named to date:

The Internet company also said its chief executive, Tim Armstrong, would be chairman of the board once the spinoff is complete.