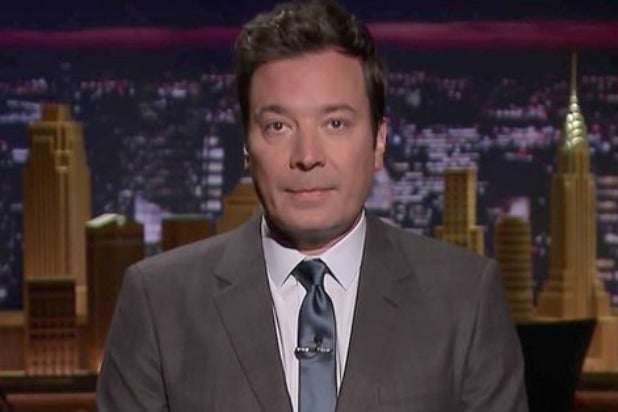 Late-night host Jimmy Fallon has apologized publically after facing backlash on social media over an old “SNL” skit from 2000 in which he wore blackface, calling the decision “unquestionably offensive.”

The hashtag #JimmyFallonIsOverParty was trending Tuesday as a result of the Fallon and Darrell Hammond sketch, which features Fallon doing an impersonation of Chris Rock in full hair and makeup to look like the former cast member.

“In 2000, while on SNL, I made a terrible decision to do an impersonation of Chris Rock while in blackface.  There is no excuse for this. I am very sorry for making this unquestionably offensive decision and thank all of you for holding me accountable,” Fallon wrote.

A clip from the 20-year-old skit was posted by Twitter user @chefboyohdear, who pointed out, “NBC fired Megyn Kelly for mentioning blackface. Jimmy Fallon performed on NBC in blackface.”

#jimmyfallonisoverparty if ur trying to see what he did pic.twitter.com/5K2eAH7Vjn

Reps for Fallon and “SNL” did not immediately respond to TheWrap’s request for comment.

This is not the first time the clip has resurfaced. Conservative critics called out Fallon and fellow late-night host Jimmy Kimmel last year after they did not make jokes at the expense of Virginia Gov. Ralph Northam, who gained national attention for his admission that he dressed up in blackface in the 1980s.

Kimmel and Fallon’s critics argued that the two may not have condemned or mocked Northam because they have darkened their appearances in the past for comedic performances. Kimmel’s blackface moment occurred when he played Karl Malone and Oprah Winfrey on “The Man Show,” a series that ended in 2004.

Neither Kimmel or Fallon’s camp responded at the time of that story’s posting last February. However, multiple people with knowledge of Fallon’s 2000 “SNL” skit told TheWrap that the impersonation was likely done with former cast member Rock’s blessing.

On Tuesday, reactions to Fallon’s racial transgression were mixed, with some Twitter users condemning Fallon and others defending the “Tonight Show” host.

“oh my god disgusting… i can’t believe he did that.. i’m so upset,” wrote user @idcnext.

“I just want to understand how this got through writing, table reads, rehearsals etc. This is more than Fallon’s fault,” wrote @BravoJGray.

“Well, Fallon shouldn’t have did what he did but hey guys . . . why not cancel Loren Michaels? He approved the sketch. Too, LM has a problem giving POC and WOC a seat at [the “Saturday Night Live”] table for the last 50 years,” wrote user @_rockN_rolla.

Others pointed out the many other stars who have been called out for using blackface in the past, including actor Robert Downey Jr. and Canadian Prime Minister Justin Trudeau.

“Hello RDJ anyone?? #jimmyfallonisoverparty,” wrote user @nova_mare along with a GIF of Downey Jr. in the 2008 Ben Stiller flick “Tropic Thunder,” in which he played a black Vietnam war soldier.

“So jimmy fallon is canceled for this but justin trudeau does it dozens of times throughout his youth and is still re-elected as PM,” wrote @kyriehugsloth. “I don’t understand this planet.”

“[Unfortunately] this gets mentioned/tweeted about once a year without a peep of an apology from @jimmyfallon,” tweeted @thatchelseagirl, who also provided a link to a 2019 Jezebel.com article covering Nick Cannon’s callout of Fallon, Jimmy Kimmel, Sarah Silverman and other entertainers who have worn blackface. Silverman has since apologized.