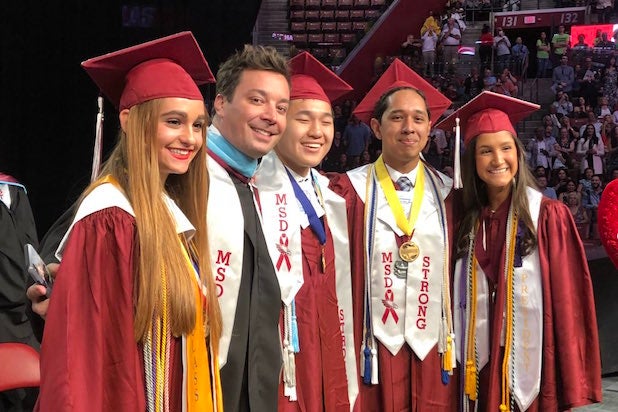 “Tonight Show” host Jimmy Fallon was the surprise commencement speaker at Sunday’s graduation ceremony for Marjory Stoneman Douglas High School, the site of the Parkland, Florida, shooting where 17 were killed.

During the speech, Fallon thanked the graduating seniors for “your courage and your bravery,” and noted that he met several members of the class in Washington D.C. during the March for Our Lives rally this past spring. Several seniors at Marjory Stoneman have made headlines in recent months for spearheading activism for gun control reform, including the school’s LGBT club president, Emma Gonzalez.

In anticipation for the crowd expected for the event, school officials moved the ceremony to the BB&T Center, the home venue for the Florida Panthers hockey team. The four seniors who were killed in the shooting were honored as their families received their diplomas on their behalf.

Despite the solemn moments remembering the fallen students, Fallon encouraged graduates to celebrate their accomplishments and, of course, he threw in a few jokes about what their futures hold.

“You won’t be classmates anymore. You’ll be adults who Facebook search each other at 2 in the morning for the next 10 years,” he quipped.

Jimmy Fallon at the Stoneman Douglas graduations ! He was so funny literally everyone went from crying to laughing. His speech was everything. #Classof2018 #MSDStrong congrats Little sister!!! pic.twitter.com/OAV64qtd0W

Shoutout to @jimmyfallon for being the goat and showing up at the #MSDStrong graduation pic.twitter.com/ly98BIXy6D

After the ceremony, Fallon sent a thank you to the graduating class and MSDHS for hosting him.

Congratulations Marjory Stoneman Douglas Class of 2018! You are not just the future – you are the present. Keep changing the world. Keep making us proud. #MSDStrong #YouAreThePresent pic.twitter.com/czvZwezKSt