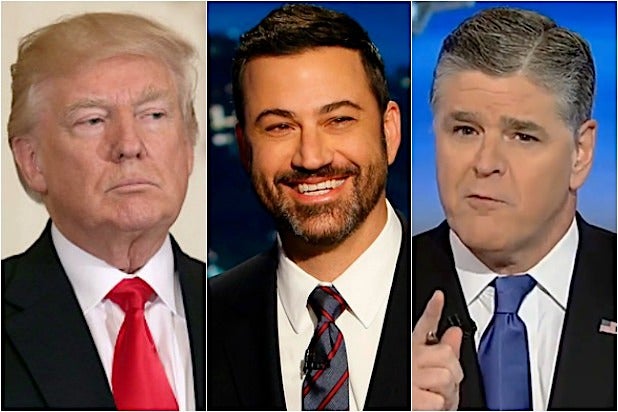 Jimmy Kimmel is under fire for resorting to gay jokes in his feud with Sean Hannity.

During an exchange of insults with the Fox News host Friday, Kimmel tweeted a joke implying that Hannity has a sexual relationship with Donald Trump:

When your clown makeup rubs off on Trump’s ass, does it make his butt look like a Creamsicle? https://t.co/DEhmfOh0Hn

Kimmel later followed that up with another similarly themed insult:

Don't worry – just keep tweeting – you'll get back on top! (or does Trump prefer you on bottom?) Either way, keep your chin up big fella..XO https://t.co/R4QJCoGYCL

Kimmel retaliated during his opening monologue Thursday night, saying among other things that “if I’m an a–clown, [Hannity is] the whole a– circus.”

On Friday, Hannity resurfaced an old sketch from Comedy Central’s “The Man Show,” in which Kimmel asked various women to touch his crotch. Hannity labeled Kimmel “Harvey Weinstein Jr.” and called him “a pervert a–hole,” among other insults.

Kimmel replied that Hannity was trivializing “the horrors of Harvey Weinstein,” and noted that unlike the disgraced mogul’s accusers, “every woman was a willing participant who gladly signed a release.” That could have been the end of it, but soon after, Kimmel followed that up with the other jokes.

That turned out to be a bridge too far for some Kimmel fans, who recoiled at the content and the tone of the insult.

Also Read: Jimmy Kimmel Fires Back at Sean Hannity: 'You Trivialize the Horrors of Harvey Weinstein'

Some criticized him for relying on the idea that calling someone gay is an insult, noting that it actually just insults Kimmel’s LGBT viewers.

Love ya Jimmy but I said this to @chelseahandler yesterday and you today. Suggesting awful people are "gay for each other" isn't funny to us. You gotta stop.

I'm exhausted. Two of these "jokes" in one day is just ridiculous.

I’m physically ill over you making gay a punchline in 2018. With all the hatred out there, this is how you get laughs & RTs @jimmykimmel

Others said it was hypocritical of liberals to be okay with a homophobic joke, so long as the target is a conservative.

Haha..is this the part where liberals are OK with sexual orientation jokes as long as it's about conservatives? Funny stuff.

So, it's OK for you to make homophobic slurs? What an asshole.

And at least one person was more offended that the jokes just weren’t funny.

The outcry is similar to one faced last year by another prominent late-night critic of Donald Trump. In May 2017, Stephen Colbert sparked intense criticism after he referred to Donald Trump as “Vladimir Putin’s c–holster.”

Colbert issued a semi-apology, saying in a statement that “I would change a few words that were cruder than they needed to be,” and assuring fans that “anyone who expresses their love for another person, in their own way, is to me, an American hero.”

Representatives for Kimmel did not immediately respond to a request from TheWrap for comment.