After Donald Trump dissed Jimmy Kimmel at a rally for Dr. Oz this weekend, the late night host turned the tables back around with a scathing story about the time the former president tossed a party guest into a pool.

On Monday night’s episode, Kimmel called Oz, the Republican candidate for Pennsylvania’s senate, “a total phony.” To prove it, he treated his audience to a story Oz told at a dinner party Kimmel had attended years ago, when Trump was running for office for the first time.

During one of Trump’s bashes at Mar-a-Lago, a woman approached her host. “He’s telling somebody else how good she looks or something, and [the guest] says, ‘Donald, how do I look?’ And he says, ‘You’d look better wet,’ and he shoves her in the pool,” Kimmel recalled Oz saying. 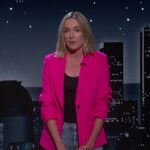 Also Read:
Kimmel Hands Monologue Over to His Wife to Urge Support for Abortion Rights in Midterms (Video)

“He pushes this fully dressed older lady into the pool, and she’s humiliated,” he continued. As Oz’s wife Lisa helped the woman out of the pool, “Trump just looked on and laughed like a maniac.”

Kimmel closed out the story by doubling down on his first point.

“[Dr. and Lisa Oz] told us this story with disgust, they were disgusted, and now [Oz and Trump are] up on stage endorsing each other,” Kimmel said. “Isn’t that great? Lot of integrity there.”

Kimmel also hit back at Trump calling his show “dead” because Republicans no longer watch it during his monologue. 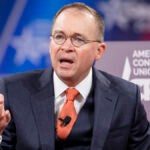 “And I will say, in January our show will have been on for 20 years,” he continued. “You got kicked out after four. I’m on television, you’re on the toilet at your golf club screaming at yours.”

Watch the full clip of Kimmel’s Dr. Oz story in the video above. 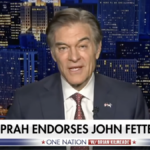 Also Read:
Mehmet Oz Responds to Oprah’s Endorsement of Opponent John Fetterman: ‘She and I Have Different Politics’ (Video)
x