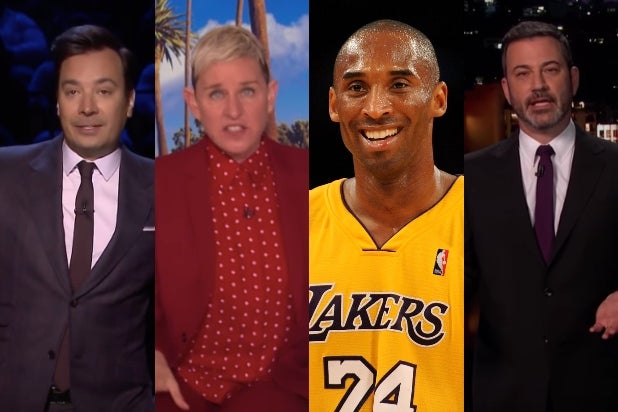 The mood was somber on the talk show circuit Monday, with Jimmy Kimmel, James Corden, Jimmy Fallon, Conan O’Brien and Ellen DeGeneres taking the first moments of their programs to remember late NBA legend Kobe Bryant, who died in a helicopter crash Sunday along with his daughter, Gianna, and seven others in Calabasas, California.

Fallon recalled going on a beer run with Bryant when he was just 17, Kimmel told a heart-wrenching story of how Kobe visited his son following his heart surgery, while O’Brien described him as “naturally very funny and charming.”

Check out their tributes below:

Also Read: Kobe Bryant Recalled at Oscar Nominees Luncheon as 'Most Excited Person in the Room' When He Was Nominated

Fallon got choked up as he told the story of the first time he met Bryant back in 1996. As he told it, he was 21 and “just starting out” in the Los Angeles comedy scene when he found himself at a party, where he started randomly talking to a young man he quickly learned was then-rookie Laker Kobe Bryant, who was 17 at the time.

“When we ran into each other over the years, we’d laugh about the time that we first met. We’d laugh at all the good things that have happened since. And we’d laugh about how much fun it was to raise kids, all the stupid mistakes we made trying to figure out how to be good dads,” Fallon said, tearing up.

“Kobe had four daughters and I had two daughters, and today he and one of his daughters are gone,” Fallon continued.”But I think I knew Kobe well enough to know that he rose to any challenge by digging deeper and getting back to work. So let’s honor Kobe, Gianna, and the other lives that were lost yesterday by following his example. Love your family, love your teammates, and outwork everyone else in the gym.”

Kimmel described Bryant’s passing as a “punch in the gut,” and remarked that the Lakers legend was a hero “in the way that Superman is a hero.”

Also Read: Kobe Bryant Recalled at Oscar Nominees Luncheon as 'Most Excited Person in the Room' When He Was Nominated

“Kobe was — and I know this might not make sense — but he was just the last person you could have ever imagined something like this happening to,” Kimmel said. “He was so strong, and handsome, and smart, and energetic …he was a hero. I know there are more important things than basketball … but Kobe was a hero in the way Superman is a hero. He was so big and full of life, it was almost like he was a fictional character.”

Kimmel went on to recall how the father-of-four visited his family after their eight-month-old son has heart surgery. “When my son had heart surgery, Kobe checked in with me, repeatedly. He made a point, once Billy was out of the hospital to meet him. He wanted to meet him. And from time to time, he’d check in on how he was doing,” the late-night host recalled.

Watch Kimmel’s teary-eyed tribute, and some clips of Bryant’s appearances on the show, below.

“It’s still so hard to fathom the news yesterday that we lost Kobe Bryant,” James Corden said at the beginning of the “Late Late Show” Monday.

“Since the news broke, I keep finding myself thinking about the last time Kobe was here on the show. He was freshly retired, and I remember him saying to me he couldn’t stop talking about how excited he was to have all this free time to devote to his family and to coach his daughters,” he said. “And I remember loving hearing him talk like that. A man who had achieved so much in his life was so excited to get to be a dad for a while.”

“Many of the people who work here at our show have grown up in this city. Kobe was their hero. I’ve been talking to a lot of people on my staff today who are just devastated. Just listening to the coverage, so much is rightly being said about Kobe’s incredible gifts as an athlete and his prowess on the basketball court,” O’Brien said.

“But what I wanted to do was take a moment here, at the top of the show, to highlight another aspect of Kobe’s talent. He was naturally very funny and charming, he really was. Terrific guest. A superstar does not have to be a great guest, and he just was. Whenever he was on our show, he was a joy to talk with, and he always had the audience in the palm of his hand. That’s the guy I’ve been thinking about these part 24 hours, and it’s that memory I would like to share with you tonight.”

Watch Conan’s remarks and some clips of Bryant on the show below.

DeGeneres also took time out of her show to remember Bryant.

“As you all know, it was a very tough weekend here in Los Angeles,” DeGeneres said. “Kobe was a legend who will always be a legend for what he accomplished on the basketball court, but also remembered for his kindness and the times he helped us give back to deserving people on our show.”

Watch DeGeneres’ remarks and some clips of Bryant on her show below.