Earlier on Tuesday, Rubio said he wouldn’t be attending the speech because he didn’t want to take a COVID-19 test. “I only take a test if I’m sick,” the Republican lawmaker added.

On “Jimmy Kimmel Live,” the late night host called Rubio’s excuse “incredibly stupid,” reminding audiences that “you can have and spread COVID without any symptoms.”

“But, in fairness, that is what Marco Rubio does. He is very on-brand,” he continued, adding: “You know why he won’t take it? Because if they swab his nose, it would probably test positive for Donald Trump’s butt.” 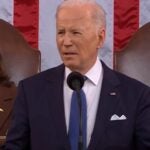 Also Read:
Biden Backs Ukraine, Shrugs off Heckles and 3 Other Takeaways From State of the Union

Later, Kimmel took aim at the former president, citing a poll conducted by Harvard University that said “62% of Americans believe that Russia would not have invaded Ukraine if Trump was still president.”

“It kind of misses the point,” he said. “Trump was a Russian invasion, of us. And as far as this fairy tale about him being tough on Putin, remember when our U.S. intelligence informed our president that Russia did everything they could to disrupt our election. Then, when given the choice — Putin or our own FBI and CIA — guess who he picked?”

He then rolled a clip of Trump saying he “didn’t see any reason why it would be” Russia that tried to interfere with the election.

In his recap of the Biden’s speech, Kimmel also argued that the president could’ve saved time by simply tweeting that the state of the union is “malarkey AF.”

“The state of our union is about as strong as Kim and Kanye right now — it’s not,” he joked.