Jimmy Kimmel was back on ABC on Monday night. And while he had a lot to be happy about, the state of health care in America wasn’t one of those things, nor were all the reactions in the media to his opinion on the matter.

His newborn son, Billy, is on the road to recovery after emergency heart surgery, but he came under fire in some circles for wading into politics while sharing his touching personal story.

“One week ago tonight, I made an emotional speech — that was seen by millions — and as a result of my powerful words, Republicans in Congress had second thoughts about repeal and replace, they realized that what is right is right,” Kimmel said, “and I saved health insurance in America!”

“Oh, I didn’t? They voted against it anyway?” he continued. “I really need to pay more attention to the news.”

By a slim margin, the U.S. House of Representatives passed the GOP plan to replace Barack Obama’s Affordable Care Act last Thursday. The imminent repeal of the ACA, known as Obamacare, sparked outcry across the country, especially among those concerned about the treatment of Americans with “pre-existing conditions” who may be unable to obtain affordable health insurance under the new bill.

While Kimmel thanked everyone for the outpouring of support for Billy and his family, he also revealed that there were some “not-so-nice things” said online too, including from some members of the media.

Also Read: Senator Who Called for 'Jimmy Kimmel Test' to Appear on His Show

“This is from the New York Post: ‘Jimmy Kimmel’s obscene lies about kids and medical care,'” he read. “This is from something called the Washington Times: ‘Shut up, Jimmy Kimmel, you elitist creep.'”

“I can’t even count the number of times I’ve been called an ‘out-of-touch Hollywood elitist creep’ this week, which, I have to say, I kind of appreciate because when I was a kid, we had to drink powdered milk because we couldn’t afford the liquid variety,” he revealed.

“My father, on the rare occasion we took a family trip, would hide our dog in the car and then smuggle it into the motel room to avoid paying a two dollar pet fee. So after that, my dream was to become an ‘out-of-touch Hollywood elitist’ and I guess it came true.”

Kimmel then got serious and focused on the real issue in hand, saying: “Anyway, I’d like to apologize for saying that children in America should have health care. That was insensitive, it was offensive and I hope you can find it in your heart to forgive me.” 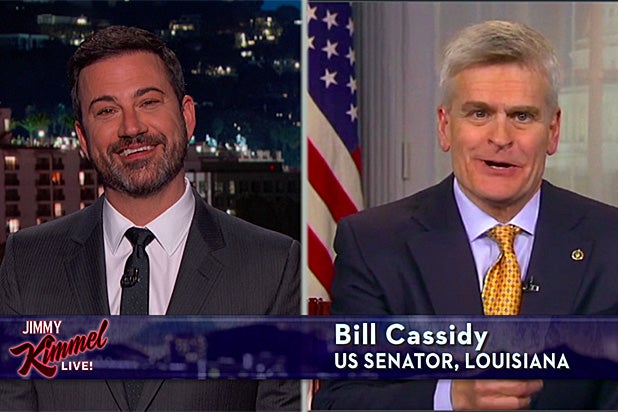 He then went on appeal directly to one of his guests Monday night,  Sen. Bill Cassidy (above), a physician and and Republican representing the state of Louisiana.

“So now the health care bill moves from the House to the Senate, where hopefully, some kind of sense will prevail,” Kimmel said.

“One Senator — Bill Cassidy from Louisiana, who is a Republican — came up with a barometer for the new health care bill, that I happen to like a lot.

The gastroenterologist is married to a retired surgeon, Kimmel explained, and he co-founded the Greater Baton Rouge Community Clinic, “which provides free dental and health care to the working uninsured. So obviously, this is someone who cares about people’s health.”

Cassidy coined the phrase “the Kimmel test” last week as part of his argument for handling pre-existing conditions in health care reform.

“Will a child born with congenital heart disease be able to get everything she or he would need in the first year of life?” he asked during an interview with CNN following Kimmel’s tearful plea when he informed viewer’s of Billy’s surgery.