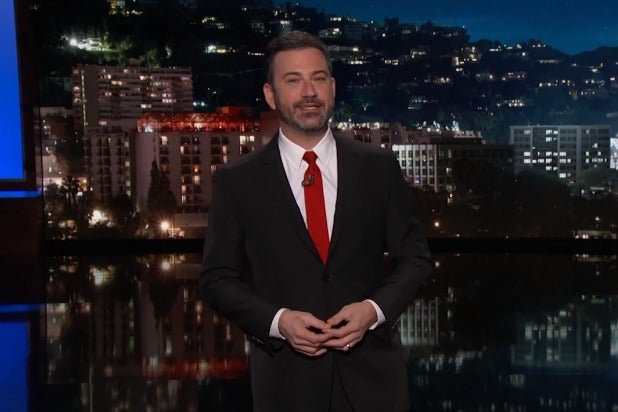 Since Jimmy Kimmel was the host of the Oscars Sunday night, his show on Monday had more of a fun, celebratory tone where he talked about the ceremony and explained the particulars of the jet ski contest and Best Director winner Guillermo Del Toro and Best Actor winner Gary Oldman were his guests.

But on Tuesday, it was back to business — which meant making fun of Donald Trump’s annual angsty tweets about the Oscars.

Trump’s big post-Oscars tweet came on Tuesday morning after ratings for this year’s show indicated viewership was at an all-time low, something Trump gleefully pointed out before saying that the “Problem is, we don’t have any stars anymore – except your president (just kidding, of course)!”

“Now Trump loves saying the ratings are down, to insinuate it’s a show of some kind of support for him,” Kimmel said. “But the truth is every year since Netflix happened, the ratings are down for every big TV event — the Super Bowl, the Grammys, the Emmys, the Golden Globes. But Trump thinks he caused the ratings to go down.  So since I was the host of the Oscars, I felt like it was incumbent upon me to respond.”

“I also want to point out — because I know he would hate it — that my tweet got more than twice as many likes as his tweet. I know that’s the thing that will get under his orange skin.”

Kimmel then got in his greatest dig at Trump with an Oscars-themed joke about Trump’s ongoing drama with Stormy Daniels.

“Trump always has a problem with the Academy Awards, which is surprising because I really think he would love the Best Picture winner, ‘The Shape of Water,'” Kimmel said.  “It’s about a monster that has sex with a woman who can’t talk about it. It’s like his life story.”

Below you’ll find embedded videos from Kimmel’s opening monologue on Tuesday night, including the part described above, Kimmel’s recap of the Sam Nunberg situation and an investigation into Alexa’s disconcerting laugh.