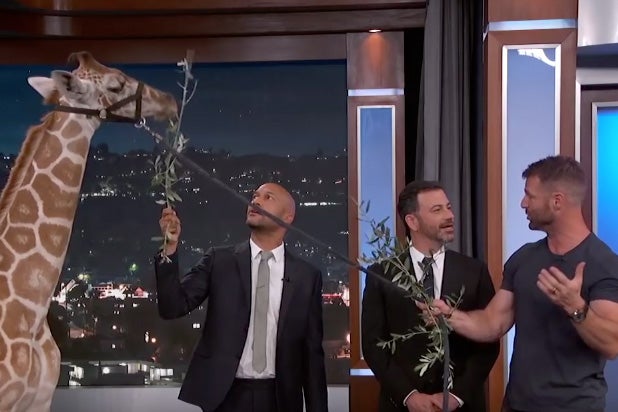 Late-night talk shows are known for gimmicks. From reading “mean tweets” to “celebrity karaoke,” producers do whatever it takes to keep viewers tuning in. There is no excuse, however, for any television show to force wild animals to be on stage.

When exhibitors work the talk-show circuit with animals, the displaced and often frightened animals must be crated for extended periods, transported, handled excessively and displayed in front of clapping, shouting crowds. When not “working,” animals are often kept in close confinement, deprived of exercise, enrichment and companionship.

Many of the animals displayed on stage are babies, and removing them from their mothers and subjecting them to the rigors of transport and the stress of an unfamiliar environment speaks volumes about these exhibitors’ desire for the spotlight.

Also Read: Jimmy Kimmel Interviews Couple Who Got Engaged at the Emmys - in Bed (Video)

Take Dave Salmoni’s appearance earlier this month on “Jimmy Kimmel Live!” where visibly distressed animals were taken on stage. Alligators, ostriches, a giraffe, a hyrax and an alpaca — many of whom would still be with their mothers in the wild — were handled by Salmoni, Kimmel and guest Keegan-Michael Key under bright lights on a noisy set.

One of the alligators tried to bite Salmoni. The two young ostriches attempted to escape after clearly being startled. The young giraffe was bucking, resisting, and kicking. Because of their unique long necks and legs, transporting giraffes is extremely difficult and can cause them life-threatening injuries. These animals were making their discomfort known loud and clear.

In a previous appearance on Kimmel’s show, a baby coatimundi was so scared that she frantically clawed Salmoni’s chest and back, leaving him bleeding on stage. He also sustained injuries after being attacked by a lion during a live show for children at a theme park in Toronto.

After the incident, he said, “[U]ntil you see a cat who you think loves you try to kill you–until you see that for yourself — you wouldn’t believe it.” Yet, he has no qualms about bringing wild and dangerous animals into close public contact.

Nearly all the exhibitors who rent out animals in Hollywood have deplorable records on animal care. A recent PETA investigation into animal supplier Birds & Animals Unlimited documented chronic neglect, including sick and injured animals who went without adequate veterinary care and were kept in filthy enclosures. Food deprivation was used as a training technique.

Hollywood animal exhibitor Sidney Yost — who made headlines for years for beating animals with sticks and feeding them contaminated food — was slapped with $30,000 in fines for more than 40 violations of the federal Animal Welfare Act.

Portraying wild animals as props to pet, play with and profit from helps to drive the exotic animal trade. Kimmel repeatedly asked, “How much are these?” and”Can these be kept as pets?”

Wildlife entertainers treat animals as if they were little more than stuffed toys and downplay their extremely specialized needs. Because exotics are sold at flea markets, auctions, in swap sheets and through the internet, it’s easy for people to buy on a whim. Unbelievably, there is no federal law prohibiting private ownership of wild or dangerous animals. Countless people have been seriously maimed or killed by their own exotic “pets,” and most animals who finally snap end up paying with their lives.

A 10-year-old North Carolina boy was killed by his uncle’s 400-pound “pet” tiger after being dragged under the fence and into the animal’s cage. A Connecticut woman lost her hands, nose, lips, eyelids, and vision when she was attacked by her friend’s “pet” chimpanzee. A 10-year-old Minnesota boy was attacked by a lion and a tiger while visiting a private collection of “pet” exotic cats. The boy’s spinal cord was severed, leaving him quadriplegic. Although these animals were all behaving naturally, they were all killed.

Jimmy Kimmel is by all accounts a nice guy, and there’s no reason to believe that any of these late-night hosts have malevolent intent when they book animal shows. But he and all the other talk show hosts can save lives by refusing to invite wildlife pimps to appear on their shows.

Cruelty to animals is not entertaining.

View In Gallery
BIO Christine Capaldo
Dr. Christine Capaldo is a veterinarian for the People for the Ethical Treatment of Animals Foundation. She has over 16 years of experience providing medical and emergency care to animals in private practice, and she now evaluates animals in captivity with the aim of securing their release from neglectful, abusive situations. She and her team have successfully rescued bears, big cats and other wild animals from neglectful and abusive roadside zoos and transferred them to reputable sanctuaries, and several of these substandard facilities have since been shut down.

Dr. Christine Capaldo is a veterinarian for the People for the Ethical Treatment of Animals Foundation. She has over 16 years of experience providing medical and emergency care to animals in private practice, and she now evaluates animals in captivity with the aim of securing their release from neglectful, abusive situations. She and her team have successfully rescued bears, big cats and other wild animals from neglectful and abusive roadside zoos and transferred them to reputable sanctuaries, and several of these substandard facilities have since been shut down.