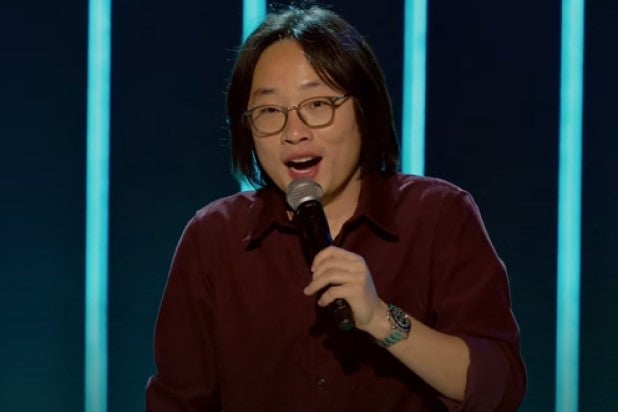 The commercial success of “Crazy Rich Asians” still lingered, Disney was launching its campaign for its live-action Mulan, and a Korean indie called “Parasite” was winning over critics and audiences. And Yang — who had a scene-stealing role in “Crazy Rich Asians” — was starring as Jian Yang in the final season of “Silicon Valley.”

It was Yang’s experience filming those projects, as well as his decade-plus doing stand-up (his experience was captured in writing in his 2018 memoir “How to American: An Immigrant’s Guide to Disappointing Your Parents”) that inspired “Good Deal.”

Also Read: Awkwafina Reflects on 'Progress' Being Made for Asian-Americans on TV: 'It's Been Incredible'

Prior to taping, Yang spent four months touring to hone his material. He scouted the venue — Seattle’s Neptune Theater — and worked with his director and production designer on everything from lighting and staging to the colors he was going to wear.

“I toured Philadelphia, New York, San Francisco and San Jose, just to name a few cities, and they were all awesome. They were big metropolitan cities with big Asian populations, and a lot of my fanbase was there,” Yang explained to TheWrap.

“In Seattle, one of their big comedy clubs had closed down. I didn’t have a chance to tour there so that was one city that the audience hadn’t seen this new hour. At the same time, it was perfectly a tech hub without Silicon Valley. And secondly, it had a great, diverse population; people kinda just get the representation stuff. So it turned out to be a great decision. Some of my favorite AAPI comedians like Jo Koy’s ‘Live in Seattle’ and Ali Wong’s first special taped there.”

And while there are a fair number of Asian jokes, Yang’s hot takes on everyday situations like dating, apartment hunting, and (not) living up to parents’ expectations, are universally relatable.

“I’ve been dating a lot of tall girls lately because it makes me look successful,” Yang boasts. “But some of them like to wear heels. That’s just disrespect. I’m like, ‘you’re already five inches taller than me, why the f–k you wearing heels?’ And she’s like, ‘it makes my ass look better!’ I’m like, ‘Your ass is at my eye-level right now and neither of us looks good, okay? I look like a child and you look like a child molester.”

Later in the show, Yang bemoans home prices in Los Angeles and how unrealistic HGTV home-buying shows are. “Bitch I can’t even buy a crack house in Compton!” he quips.

At one point during “Good Deal” while talking about representation, Yang says very matter-of-factly, “I’ve been in this country for almost 20 years now. I think I feel every bit American. But I think other people still don’t see that. As an Asian American, a lot of time people see you as Asian before they ever see you as American.”

His words ring especially true during the coronavirus pandemic, when hate crimes and violence against Asian Americans are at an all-time high.

“Every Asian person has gone through some form of that — it doesn’t matter if you were born here — it just seems like you’re different and that’s a very disheartening thing. And now with this pandemic, it’s getting amplified,” Yang explained to TheWrap.  “I never try to hit social issues on the nose. My storytelling is from my own personal point of view, what I experience. I think by doing that, people can relate. And not just Asian people. I think it’s a human experience.”

While we’re all stuck in quarantine, he believes laughter is the best medicine.

Speaking of quarantine, the comedian admitted that his signature long mane is getting too unruly after weeks in isolation.

“I really need to cut it. It’s becoming unmanageable,” Yang admitted. “My friends with curly hair can just cut their own hair. I can’t do that or else I’m going to have a bowl cut.”

“Good Deal” premieres on Amazon Prime Video May 8. Watch a clip below: